2019 has been a busy year for Boatbreaker so far. From our first day back in after the new year we had boats turning up for disposal.

The first boat through the doors was a 30ft Catamaran that was washed up on the beach in Dover. The Catamaran had only just been bought by her owner for twenty thousand pounds and unexpectedly started to sink whilst on her way to her new home in Dover.

Everyone on board had to be rescued by the lifeguard and the stricken vessel was then towed into the harbour. Whilst under tow the boat was flipped upside down and by the time it reached the beach it was full of water. The ordeal wasn’t over as the boat was then dragged upside down up the cobbled slipway and then flipped using a digger.

Our team went to Dover to tidy up the boat as much as we could before she was lifted and delivered to us in Portsmouth. We were amazed by how she was still holding together as most of the deck was non-existent.

Luckily the boat survived the lift and made it back to us in one piece. The team were then straight on her to remove anything that could be removed and re-sold. First of all the two engines were removed as they were the most valuable items left on the boat.

To be honest, the boat had taken such a battering there was very little that was still in one piece. We did manage to remove the batteries as they can still be weighed in to make some money back.

It was then time for the rest of the boat to be crushed and loaded into the large skips we had waiting. Whenever a boat comes into us it’s always a shame to see as it was once someone’s pride and joy but this one especially so as it was being crushed just weeks after being bought. 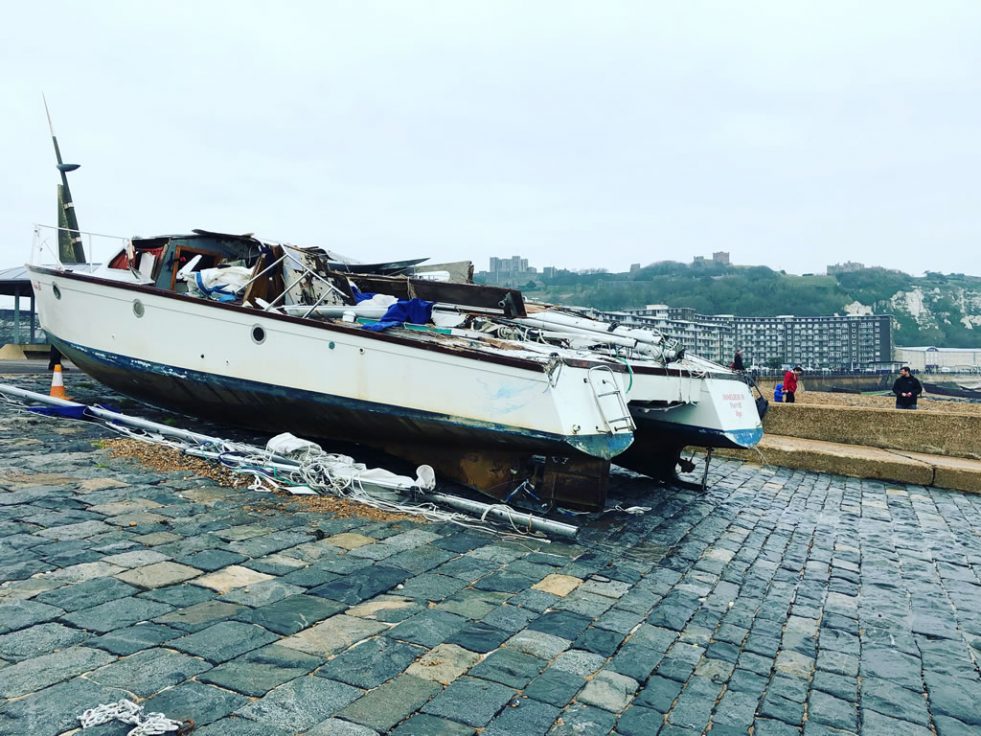 Just as the Catamaran was finished off two more yachts arrived at the yard. They had both been collected using a lorry with a Hi-ab crane from the beach at Eastney (Portsmouth). The beach is a notorious dumping ground for old boats and nearly every vessel on the beach is an abandoned boat.

Both yachts that came in had nothing worth taking off apart from the aluminum masts to go in the scrap metal bin. Whenever a boat is abandoned at Eastney anything that is worth stealing is usually stolen well before the boats get to us. 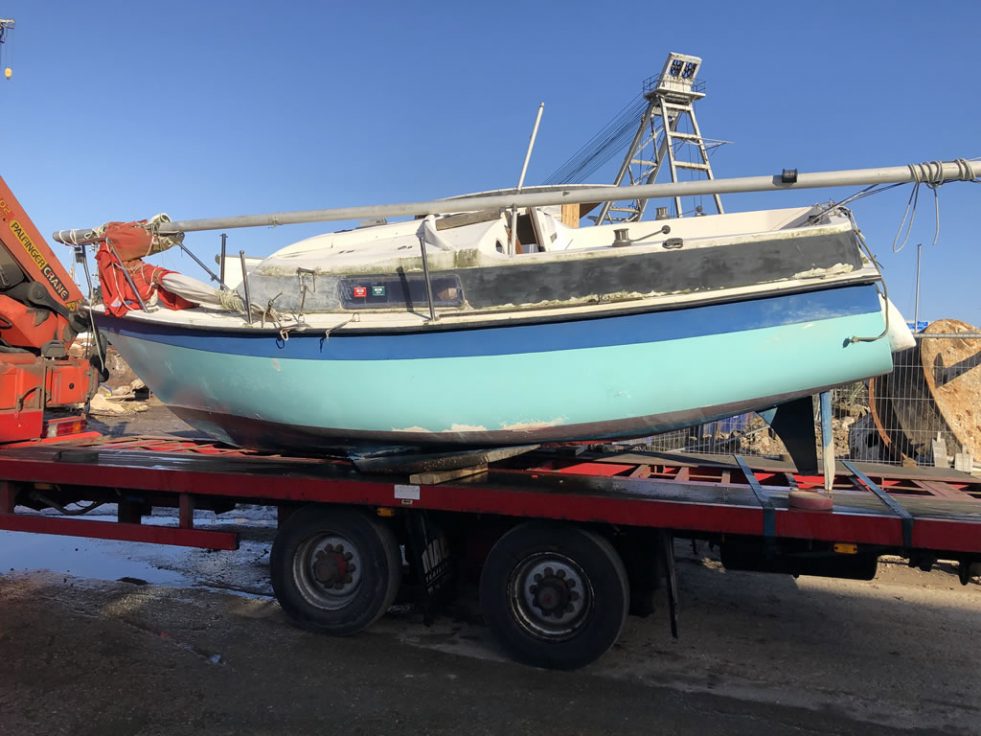 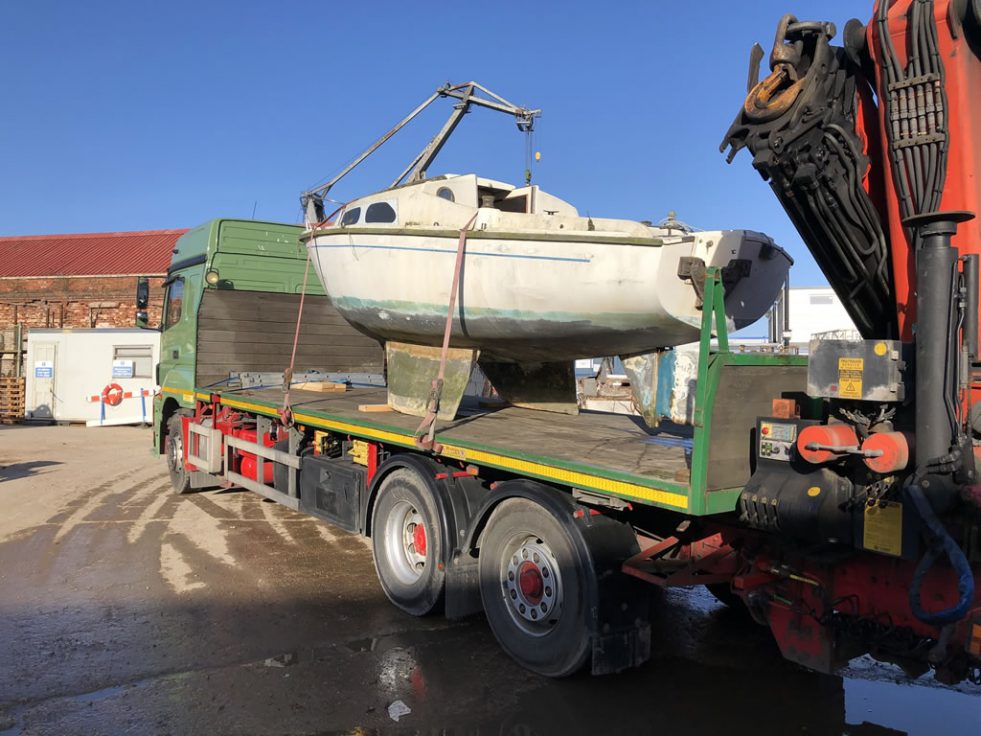 The office had a call from an insurance company to say that a Catamaran had sunk on her mooring in Gosport. Our team quickly went to investigate and ascertain first of all where the boat was. Once we got to the Millenium Bridge it was obvious where the boat was as the 30ft Cat was on her side and 80% of the boat was below the water.

A plan was formulated to get divers down to the boat and have her re-floated. We then used a crane barge alongside the divers to right the boat and pump the water out of her. The team were worried that the boat may have some damage which would cause the water to rush back in. But it soon became clear the what had caused the sinking. It seemed that a chain had held the stern of the boat under as the tide had come up.

Once the boat was towed across the harbour to us in Portsmouth she was secured on one of our moorings and she is currently awaiting disposal. 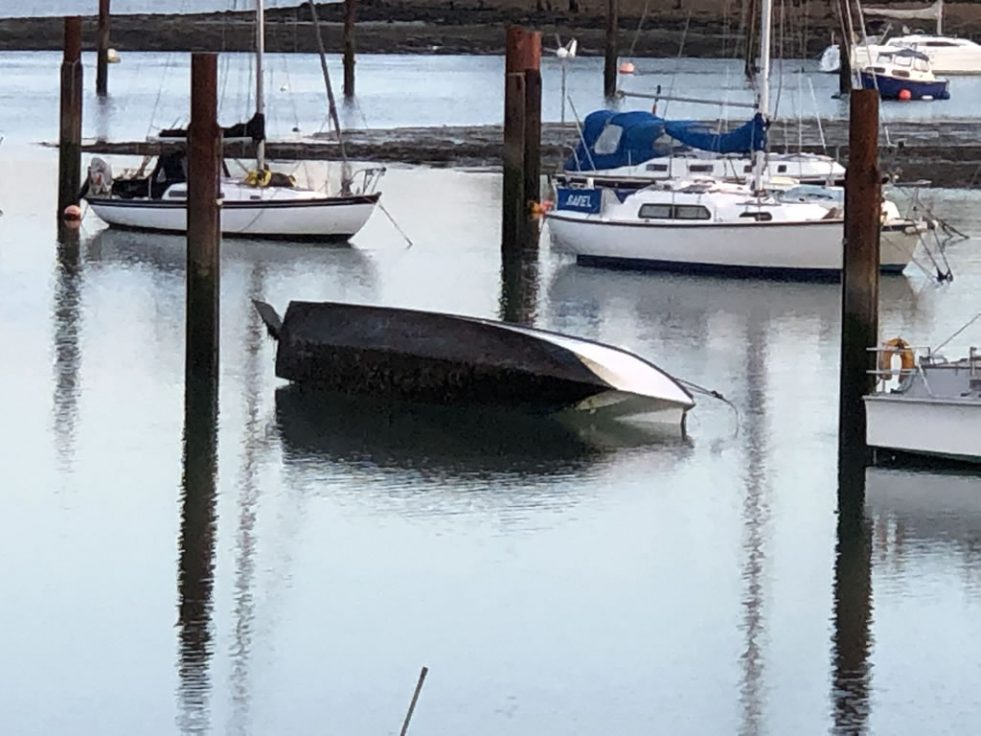 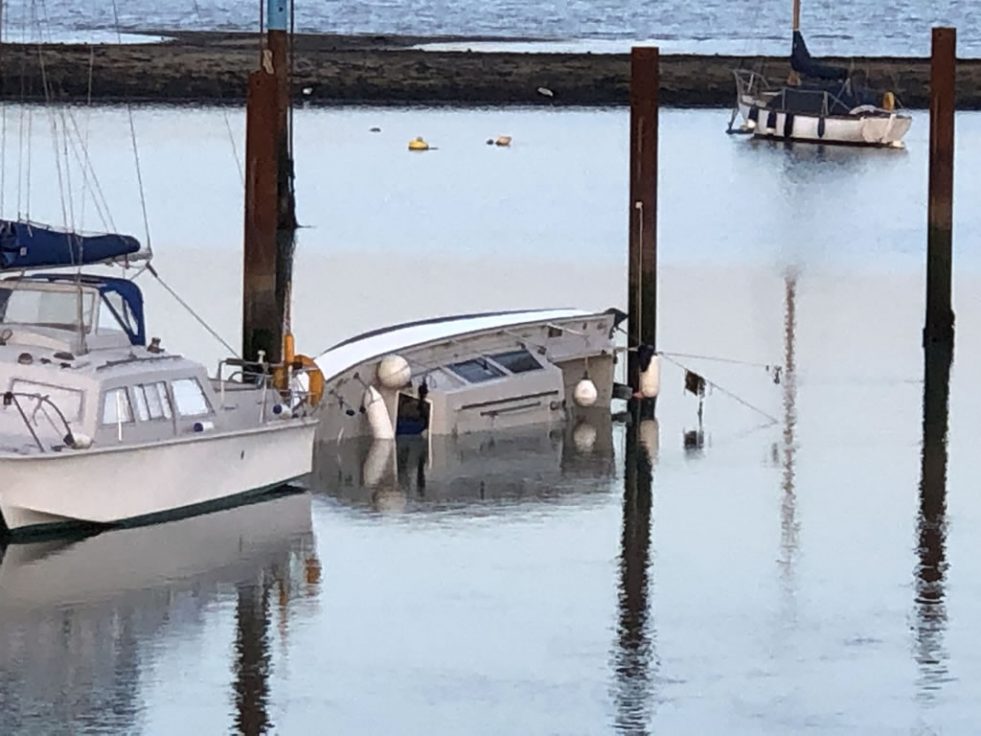 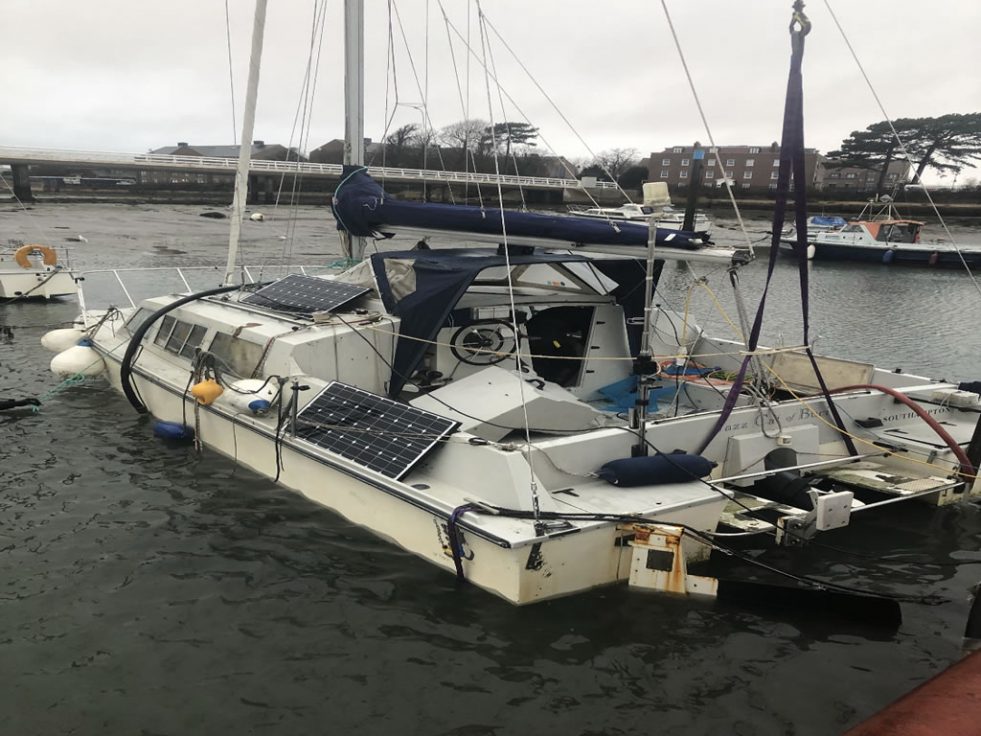 A long drive was on the cards for Steve after his return from his Thailand Holiday as we sent him up to Scotland to collect an old Snapdragon Yacht. The boat was an incomplete project that the owner no longer wanted to pay out to keep in a boat yard. The cost for him to scrap was less than another year of storage fees so it made sense to dispose of her.

When we got her back to us we removed the Yanmar engine which was sold on eBay to a customer in Wales. We also stripped off any of the scrap metal that was on there before the rest of the boat was crushed. 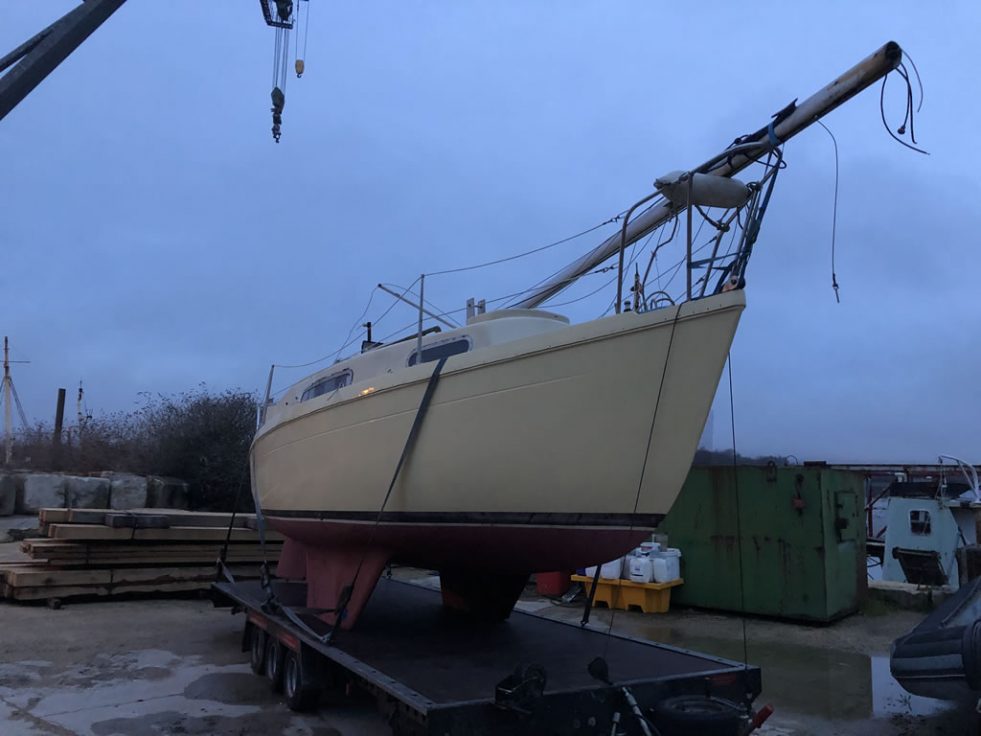 Next in there were two RIBs, one small jet boat that had been left in a garage for a number of years. We will be trying to get that one running again and list her for sale on eBay. The other larger Ribtec RIB had been stored outside at a boatyard on the Isle of Wight. It had been used each summer throughout its recent life but the tubes had been left to the elements so they were showing signs of their age.

However, despite the condition of the tubes the rest of the boat seems fairly up together and if the Yamaha engine runs someone could get themselves a nice cheap RIB. 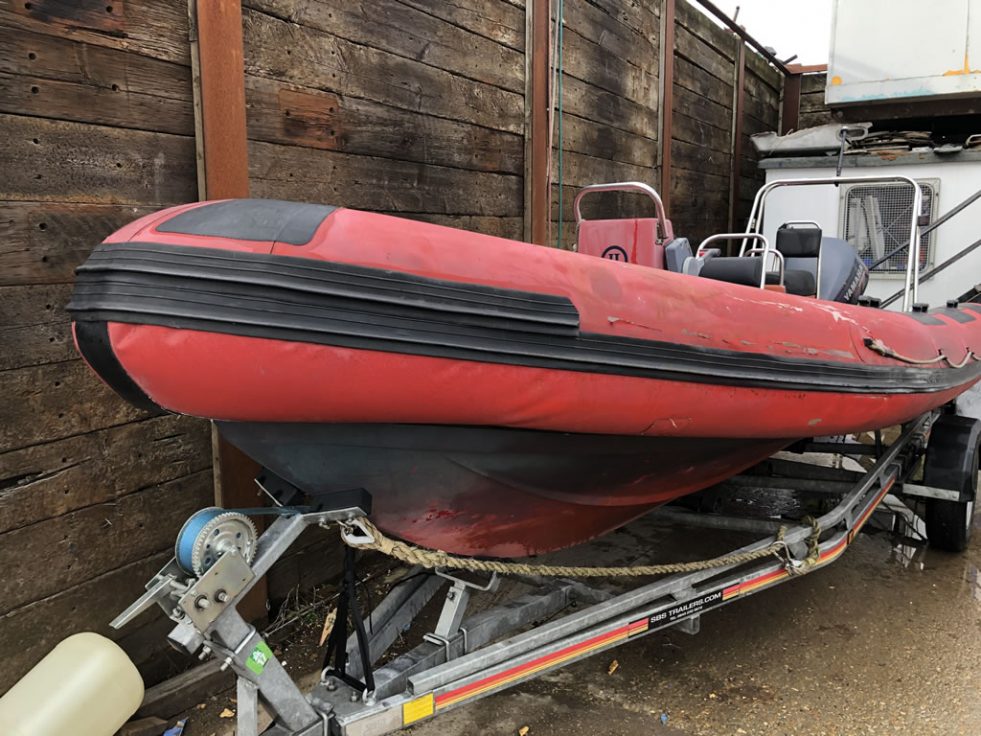 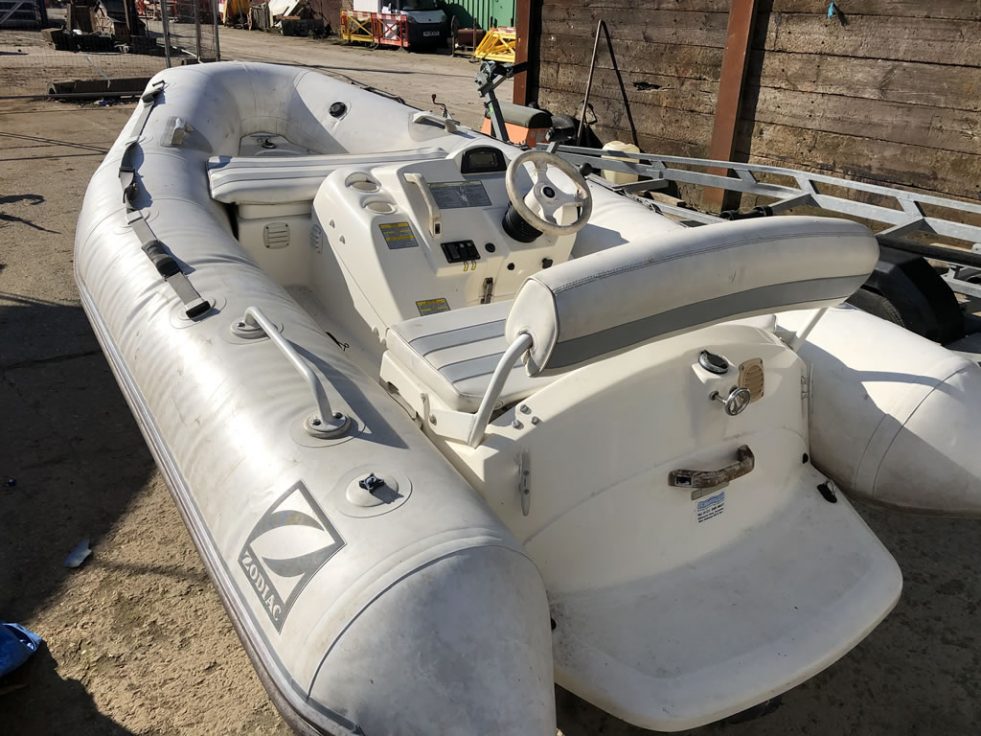 An old Stirling Starfinder 29 motorboat was the next boat to be delivered to the yard in early March. It seemed to be another boat that had been left for a number of years on her mooring. Like the two yachts from Eastney there was very little worth taking out of the boat. The team removed the engine, a few seats and some of the steering gear. 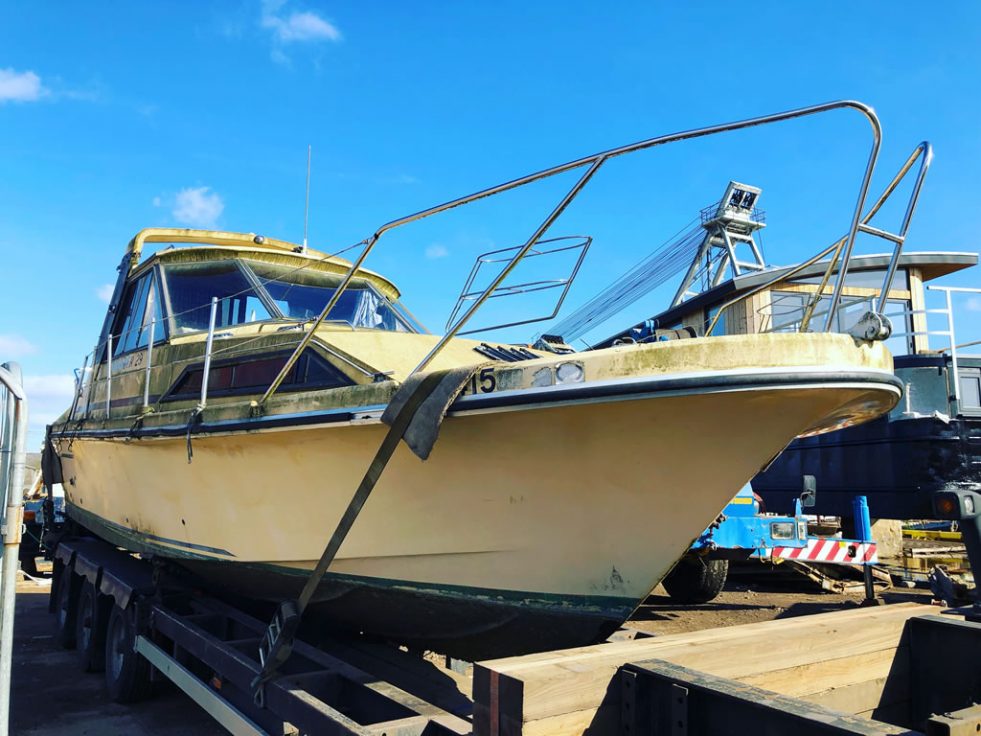