Skip to content
You are here:Home/Portfolio, Scrap a Boat, Scrap a Motorboat/Burnt Sunseeker Disposal
Previous Next

The latest boat to roll into the yard is a timely reminder of the damage that fire can do. Before the blaze the boat was a working Sunseeker 36 and would have been worth around £50,000.

Our team was contacted by the owner who had been told by his insurance company that he had to dispose of the boat after being paid out for the damage.

The Police suspect arson as the boat had been out of the water in a yard near Birmingham whilst the owner carried out some repair work on her.

One of the team initially went to have a look at the boat to make sure that she was structurally sound enough to be lifted and shifted. It was clear that the boat was a write-off but there was still enough strength in the hull to safely move the boat.

At the yard she was stored in there was plenty of space around the boat and the ground was hard which is always a bonus when organising the lifts as soft ground is no good. The plan as far as we were concerned was a simple one, arrange a crane to lift the boat onto a low loader and get the boat back to us in Portsmouth.

As the boat was estimated to be around 7.5tons we had to make sure the Hi-ab lorry we used had enough to safely lift the boat. Thankfully it had plenty of power and was able to load the boat onto the lorry with no trouble.

Our boat transport company of choice on this occasion was Shoreline Yacht Transport and Terry helped us out on the day by sweeping any lose items from the cockpit area into the bottom of the boat ready for transport. Her former owner also assisted by providing a cover that could be strapped over the burnt section of the boat to stop any debris coming out on the road.

When the boat made it back to us in Portsmouth all was intact which is always a relief. We had the crane set up and waiting on our Scrap quay when the lorry arrived. The team in the yard went about undoing the straps and getting the chains and lifting straps set up.

Carefully the boat was lifted away from the trailer and the lorry pulled clear of the boat. The team then used ropes to help the crane guide the boat around and lowered it next to the large scrap bin where the waste material would eventually end up.

All the loose burnt parts were put straight into the waste bin so we could try and uncover anything worth saving. Although it quickly became clear that the majority of the items in and around the cockpit area of the boat were a completely burnt and ruined.

We cut off the electric windlass on the boat’s bow and we removed the fuel tanks from the stern. The yard’s machines then went about crushing the boat so that we could expose the engines further before their removal.

Whilst we were half way through dismantling the boat we had a call from someone who wanted to buy some scrap engines for spares and repairs. We offered him the two engines in the boat and he came to collect them that day. It’s always nice when those sorts of calls tie in with us breaking a boat.

It’s always interesting to see how these expensive boats are put together. During the process of disposal it’s almost like we’re performing a boat autopsy. This particular boat has a foam core, and we were surprised to see how poor the finish was on the windows with just a rectangular sheet of perspex screwed behind the window frames.

If you have a boat that has been burnt, vandalised and written off then give us a call. As long as the boat is accessible we can arrange to have it removed, if the boat is difficult to get machinery close to we can also come and cut the boat on site.

All you have to do is use our Scrap Calculator on the We Scrap section of the website and we’d be happy to deal with your problem boat. 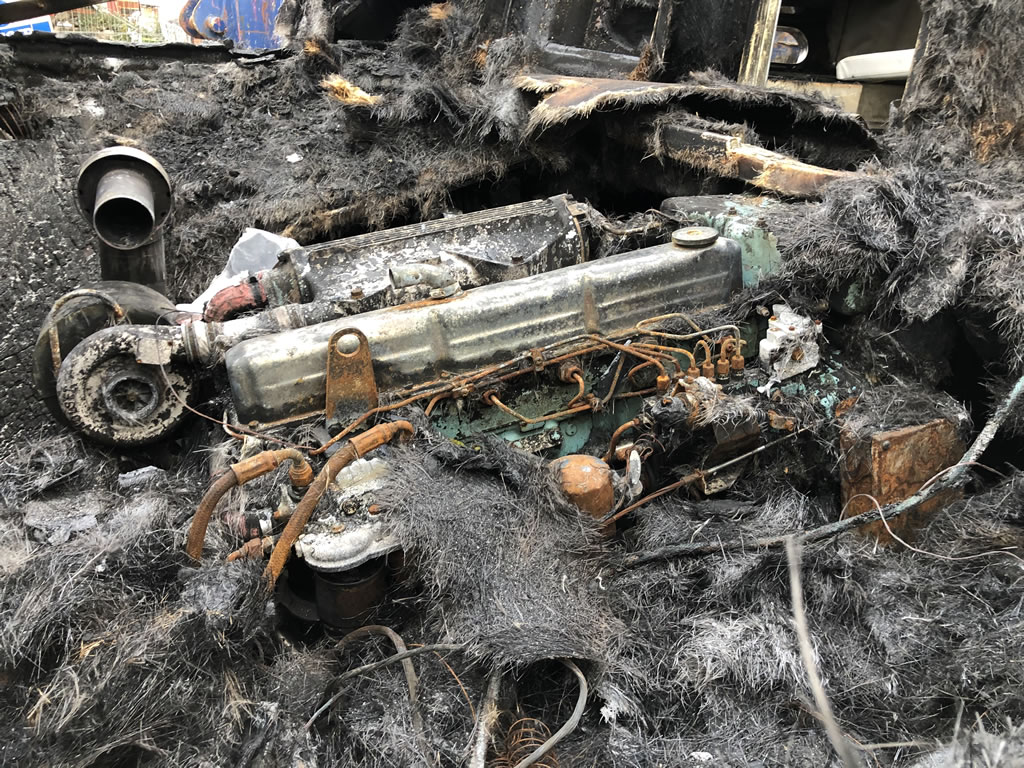 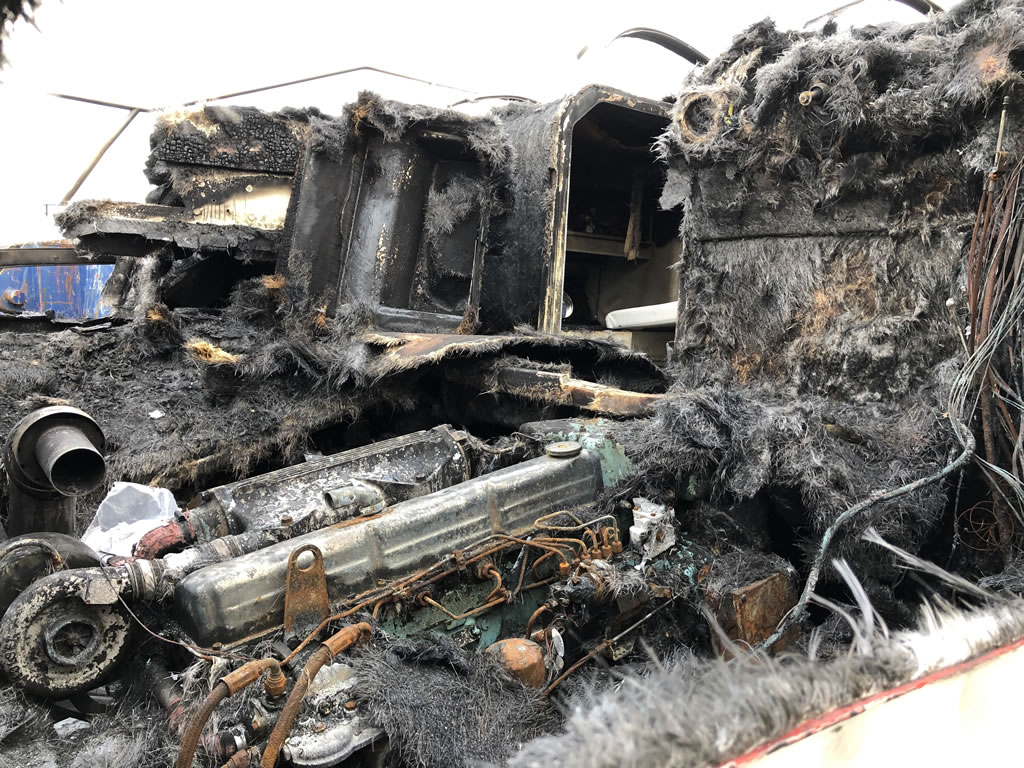 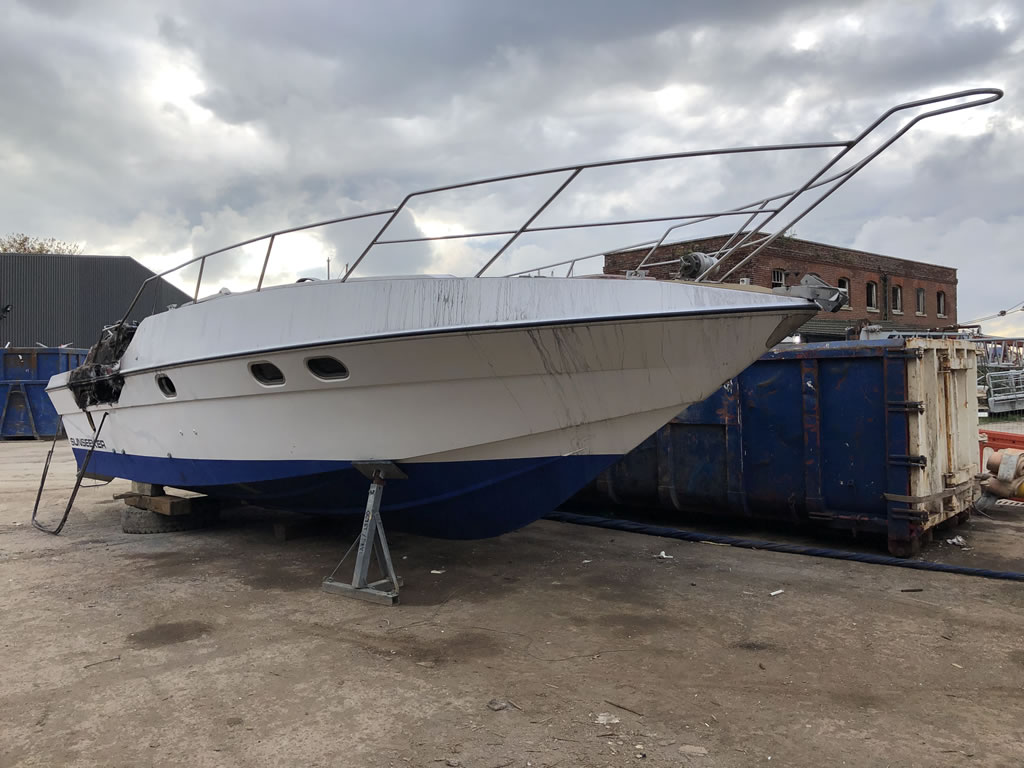 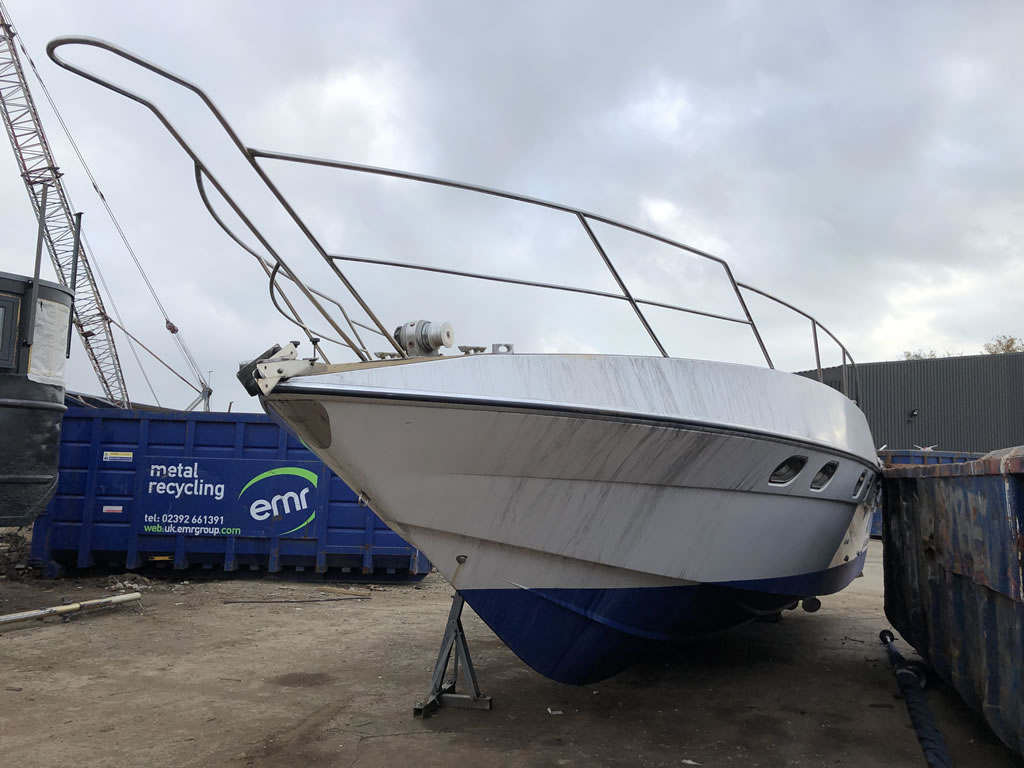 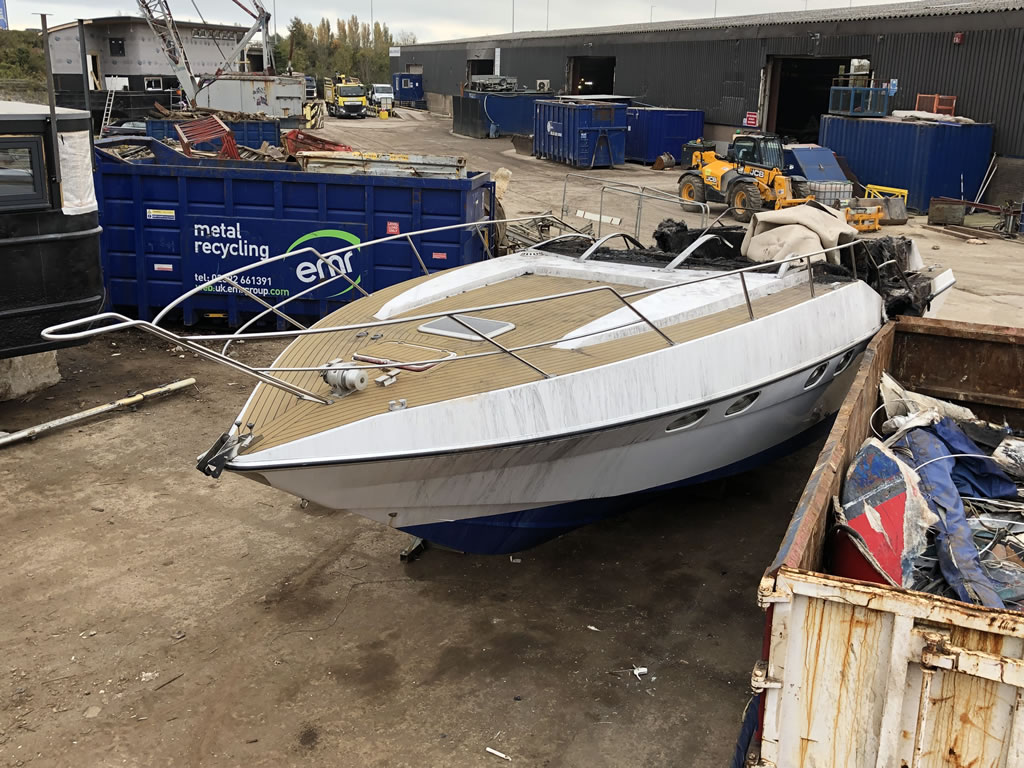 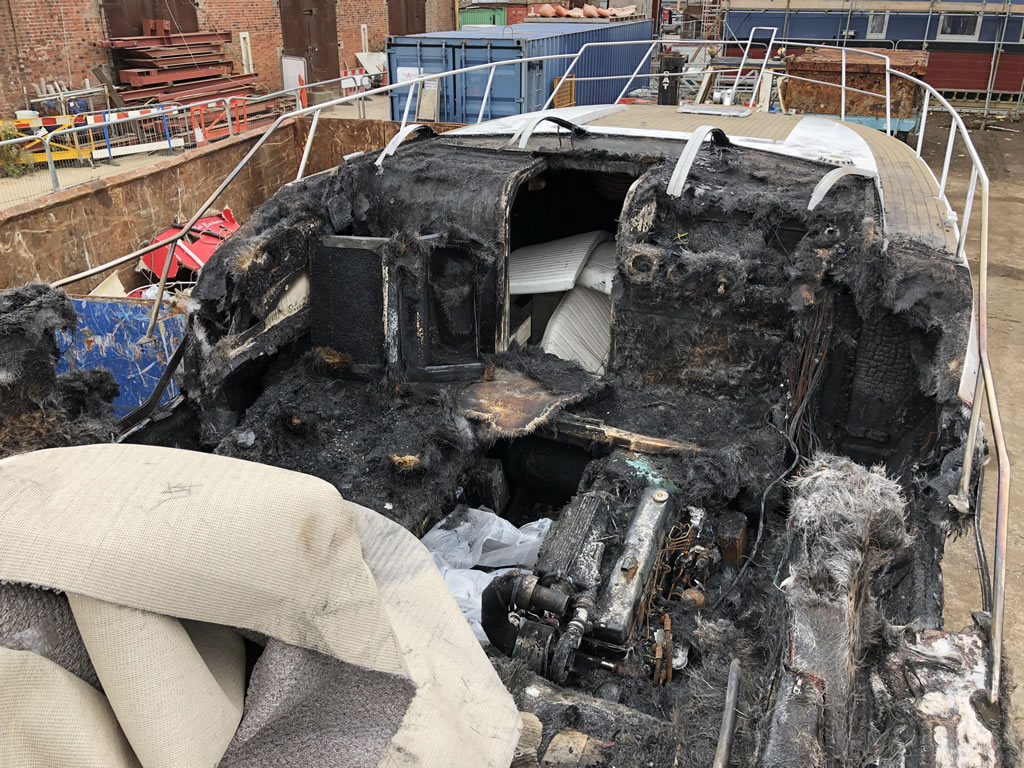 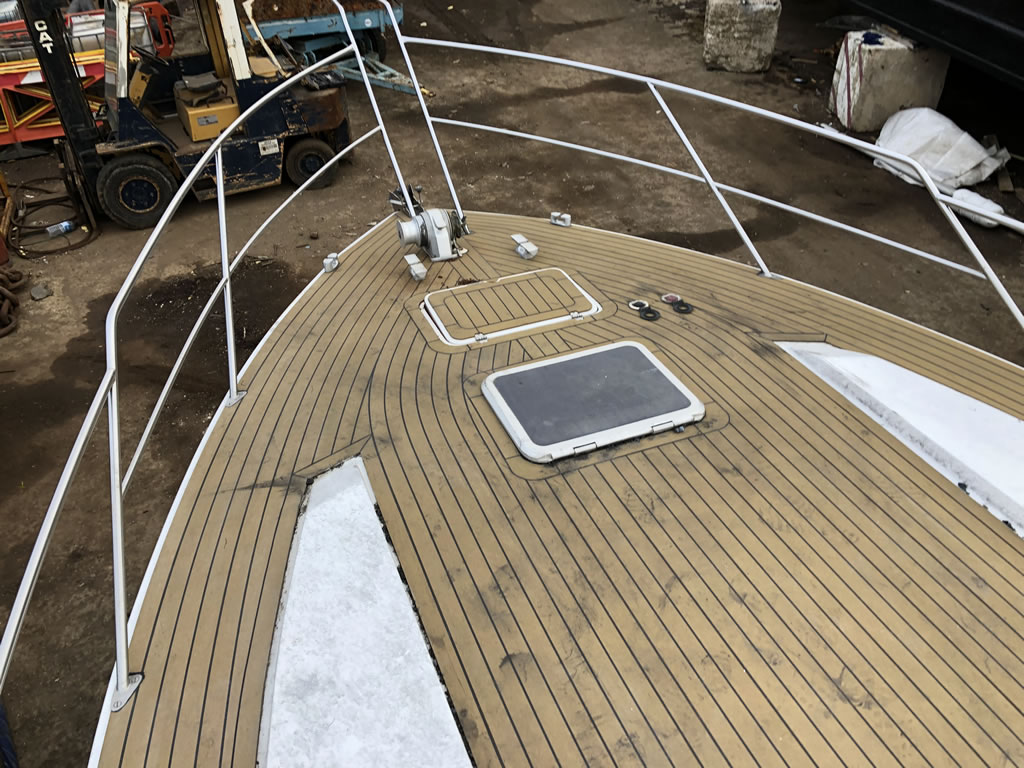 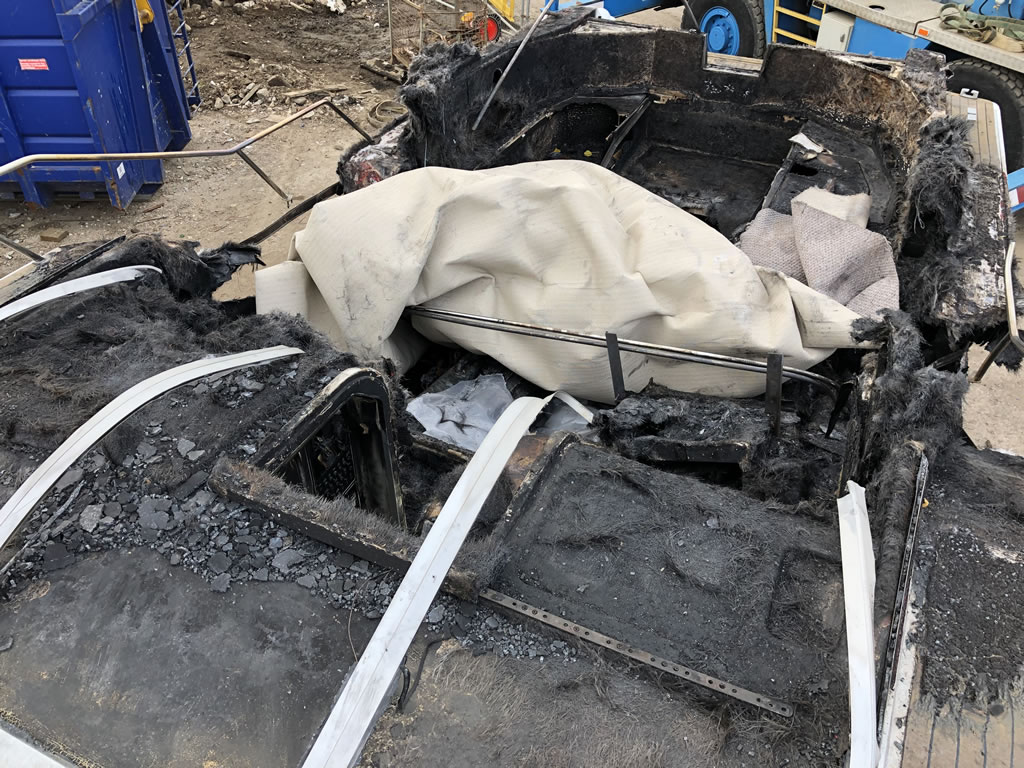 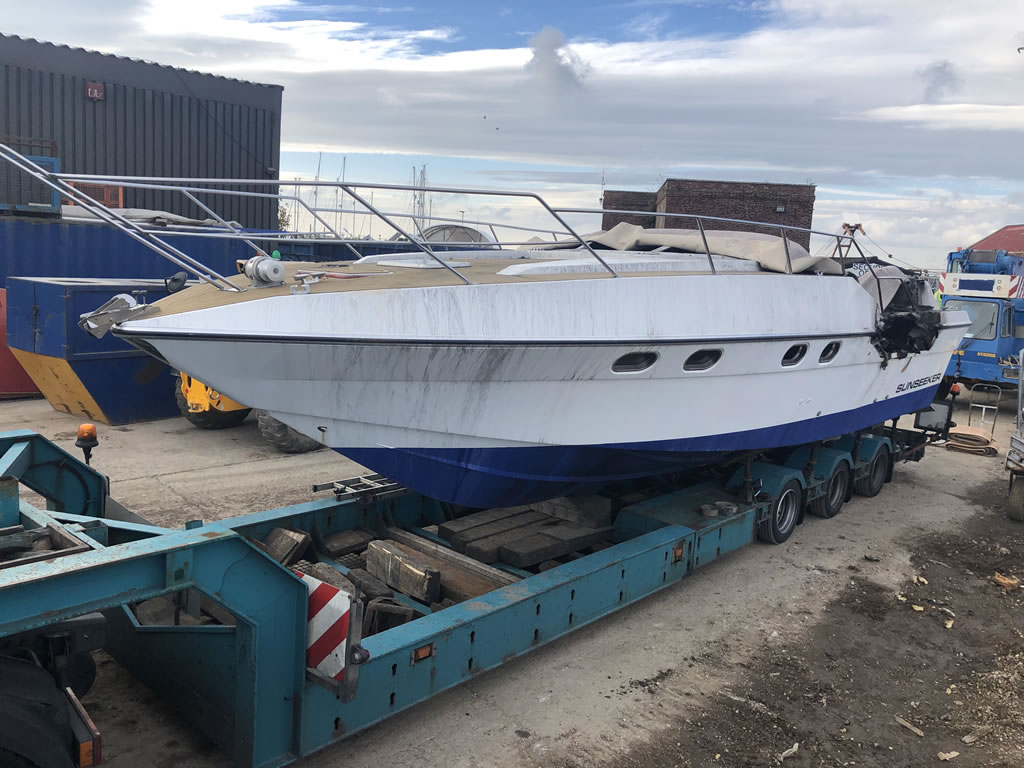 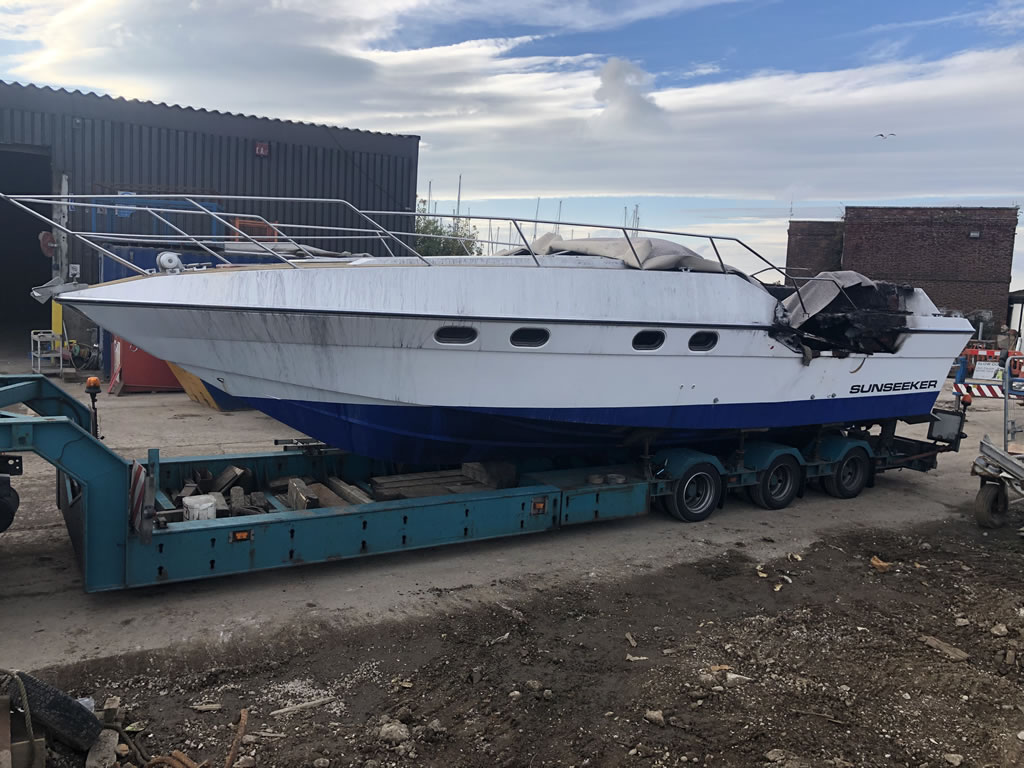