Skip to content
You are here:Home/Portfolio, Scrap a Boat/Boat Mould Disposal: Boatbreakers Breaking the Mould
Previous Next

The Boatbreakers team were on the road last week. It was a trip to Stratford Upon Avon for a boat mould disposal job. There were three large GRP boat moulds with multiple smaller moulds inside. Judging by the size of the moulds the boats that came out of them were big!

However, the boat moulds were now obviously obsolete and the company Pearl Yachts wanted them removed. They were costing the company rent each month at the industrial estate where they had been stored. 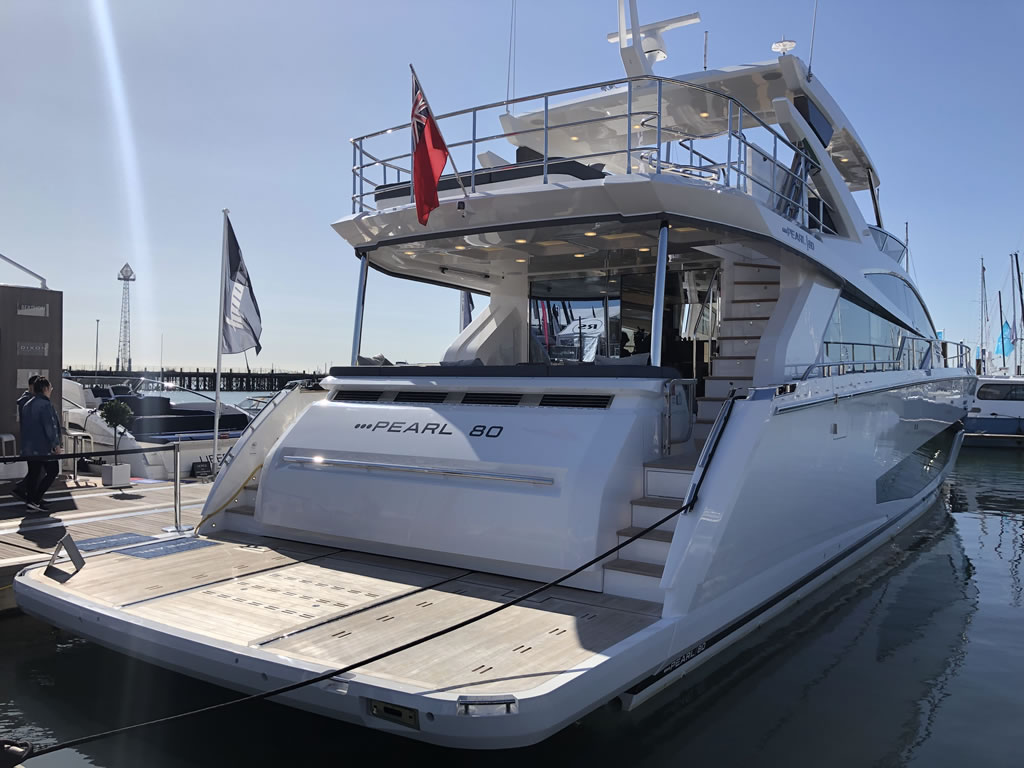 When we visited the moulds to conduct a site survey it became clear how big they were. They were originally brought to the site by road under police escort. But if we had wanted to go down this route again it would be very costly. Plus we’d have to organise a large crane at the site and another back at our Portsmouth scrapyard. As anyone who has had to hire a crane will know, the prices of hire can be astronomical.

Our boat mould disposal plan was soon devised to chop on site. We needed to hire an excavator with a grab attachment and a number or 40-yard skips. Plus a team of people had to be organised to assist Steve with the job.

There was a delay in getting the job started as soon after we’d been given the go-ahead we unexpectedly bought a new office building. If you’ve seen any of the posts about our new office it needed a lot of work to get it ship-shape!

After the office was up and running it was time to plan the boat mould disposal. The bins and excavator were easy enough to source from local companies in the area. Unlike with anything boat-related, plant hire companies don’t seem to need weeks notice in advance and were extremely helpful.

Our mould disposal cutting team were made up of three local guys who work in our Scrapyard in Portsmouth. Plus with Steve to oversee the proceedings, there was plenty of experience of boat disposal in the group.

We always anticipated that the job would take a couple of days. As realistically we knew that there would be times where we’d be waiting for empty bins to be delivered. Or full bins to be taken away. This meant that our team needed places to stay overnight. With the added complication of one of the team bringing his dog along for the ride. Luke was soon put to work finding dog-friendly hotels in the Stratford area.

As luck would have it the cheapest hotel was a spa hotel about two miles from the boat moulds. For one of the guys who was prepared to sleep in his van with the dog, a swim in the pool after work was probably unexpected!

The first day of the job went like clockwork and with the machine, bins, and team all organised the first mould was dismantled. All of the boat moulds were made of GRP with some wood and steel in the structure.

When we were first approached for the boat mould disposal job we were told that the moulds weighed around 35 tonnes. However, as we were taking the moulds apart the steel was set aside into a separate pile. These steel sections could be weighed in for their scrap value. Thankfully the skip hire company offered us a deal to take the metal away and discount the value from the waste bill.

Anytime we dismantle anything GRP whether it’s a boat or a mould the initial crunch can leave a mess. For that reason, we also ordered a scraper attachment to the excavator. This meant that as the final two boat moulds were crushed and removed we were able to tidy the site. Some small sections of GRP still needed to be picked by hand and loaded into the bins. 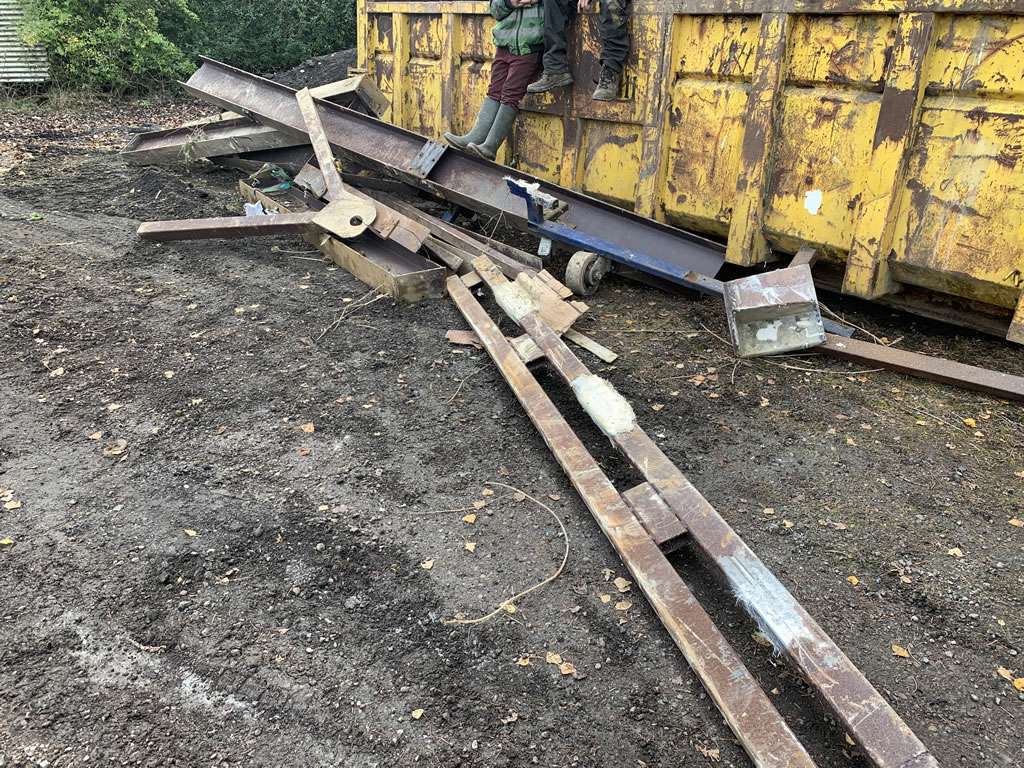 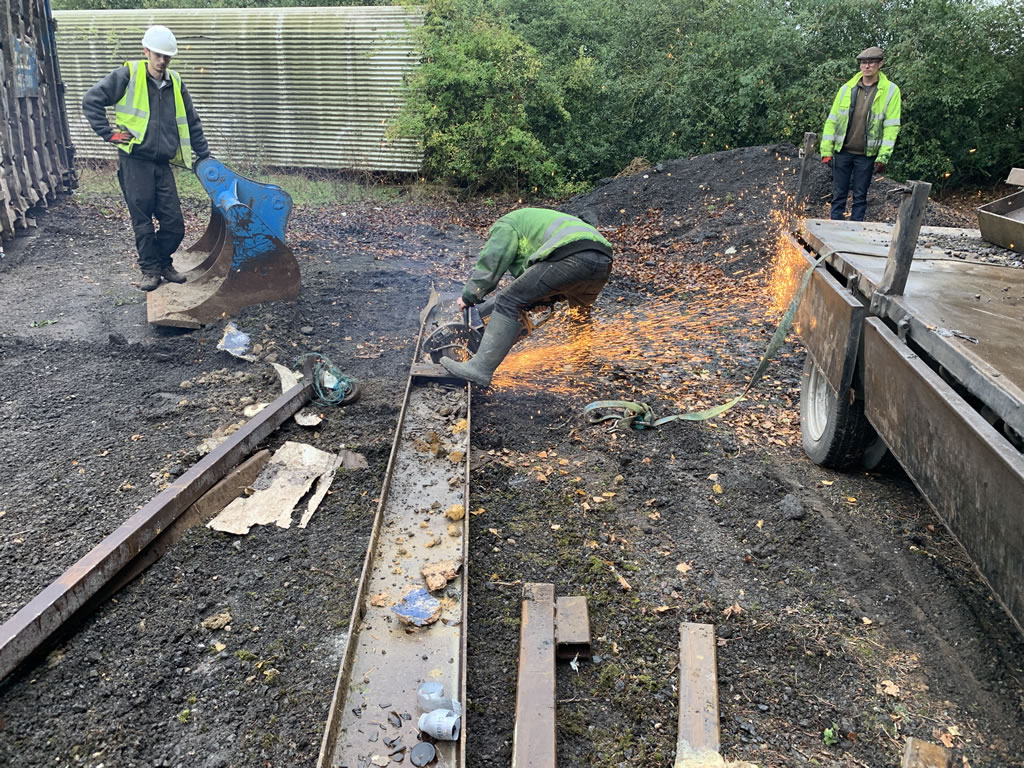 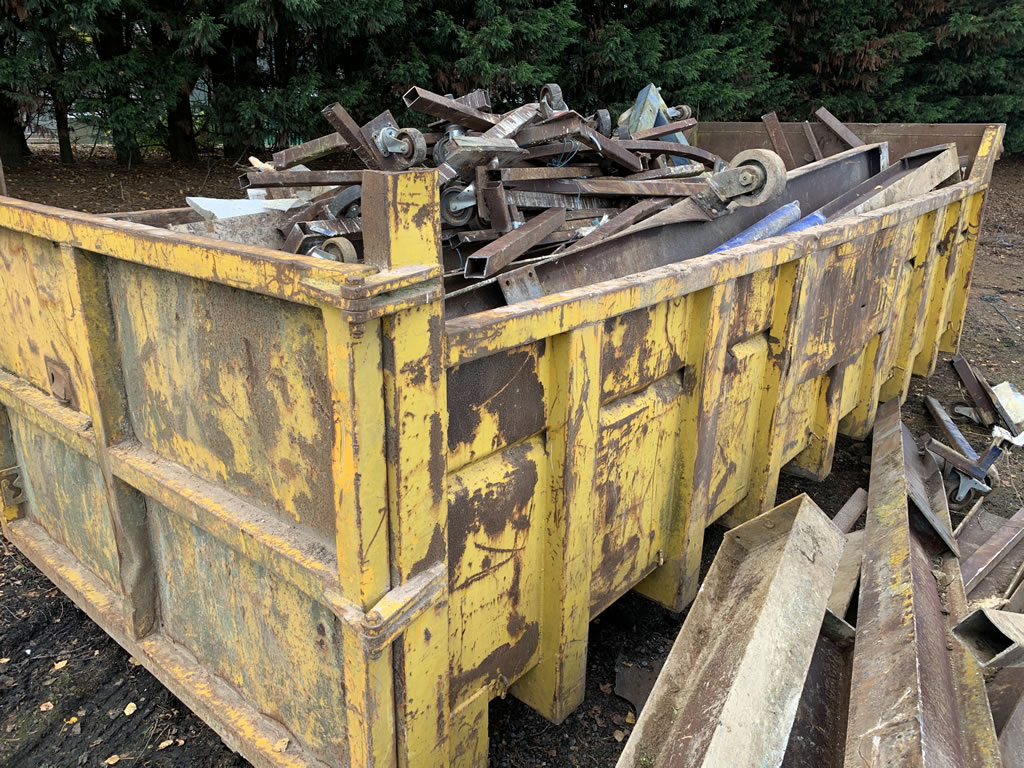 In total from start to finish, the job took two and half days. The team we assembled used their experience in boat disposal perfectly and made light work of the moulds. It was another good example of how our Boatbreakers team can be used to complete large projects. Above all, it’s great to see the before and after pictures after a job like this. We’re sure that Pearl Yachts and the owners of the industrial estate are pleased to see them gone.

When our team visited the Southampton Boat Show back in September we saw some of the Pearl Yachts fleet. Some beautiful boats must have come from the boat moulds we dismantled.

If you have a boat or even boat moulds you’d like to dispose of please get in contact. You can either call, email or use our Scrap Calculator to send your information across. 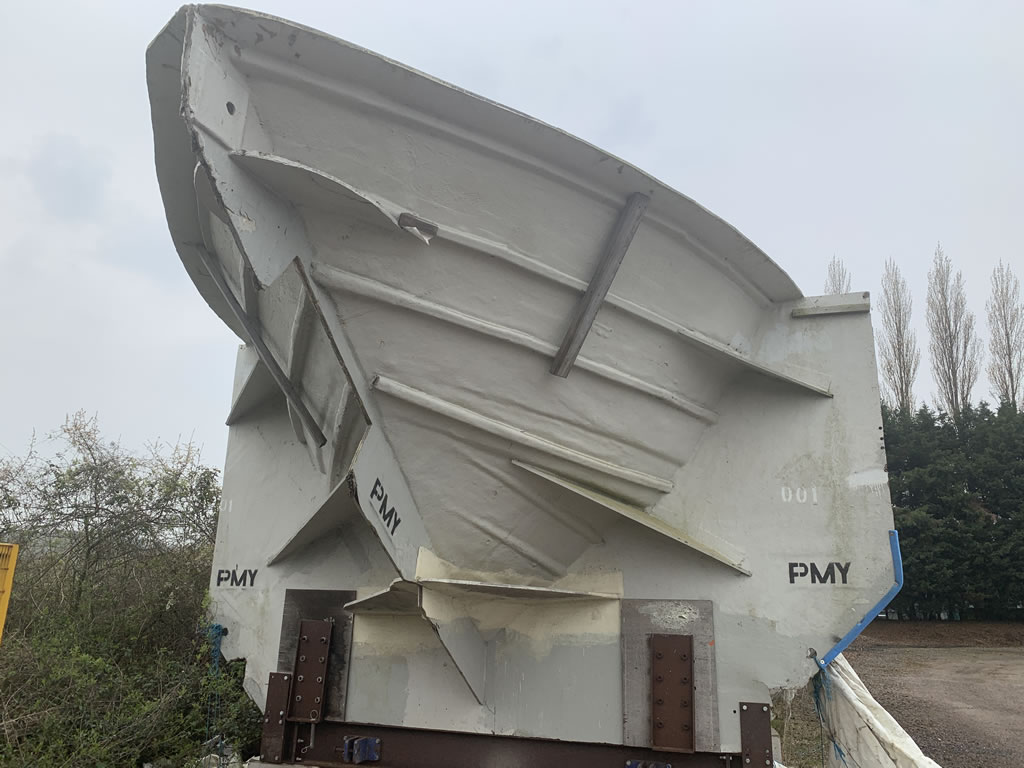 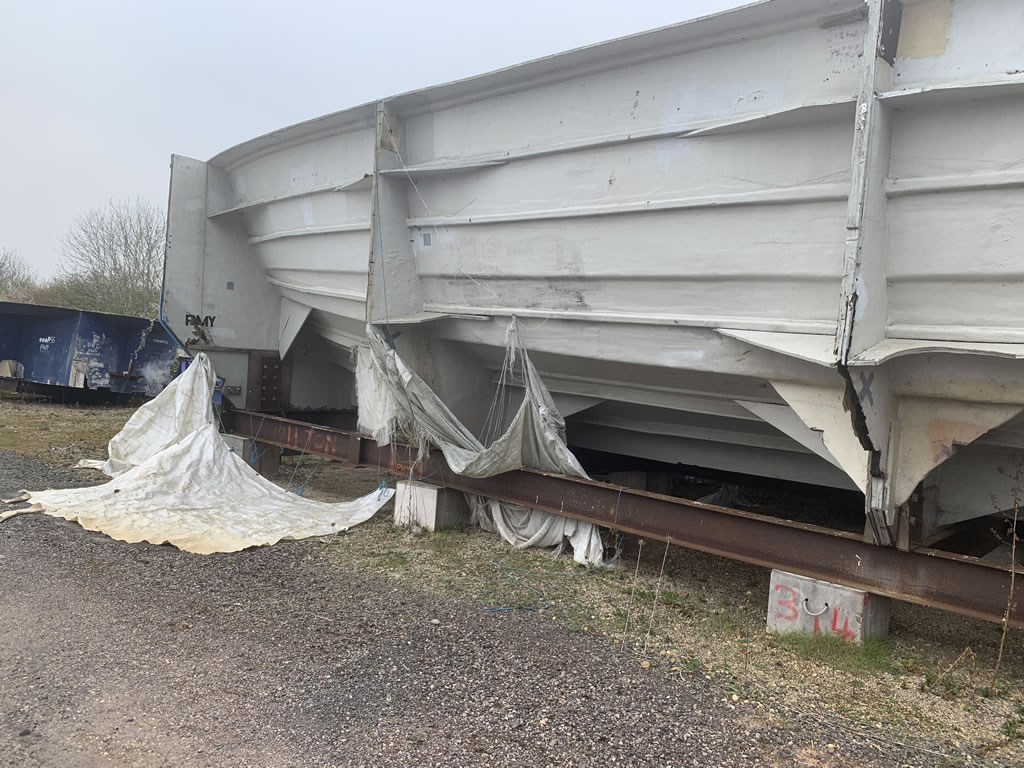 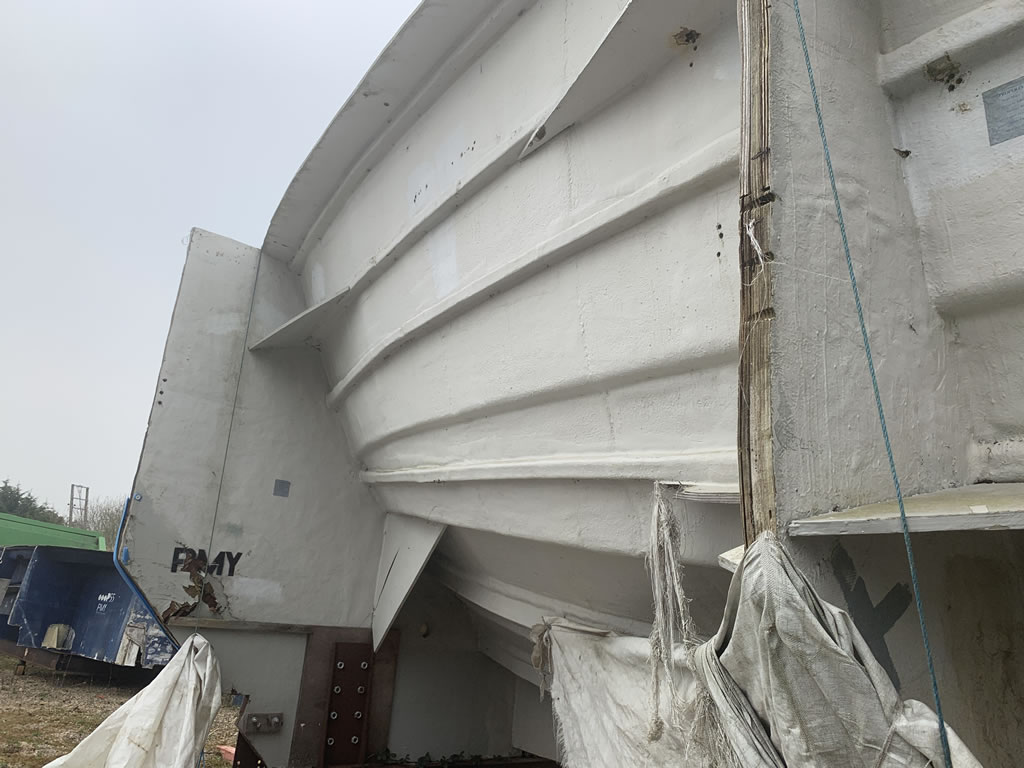 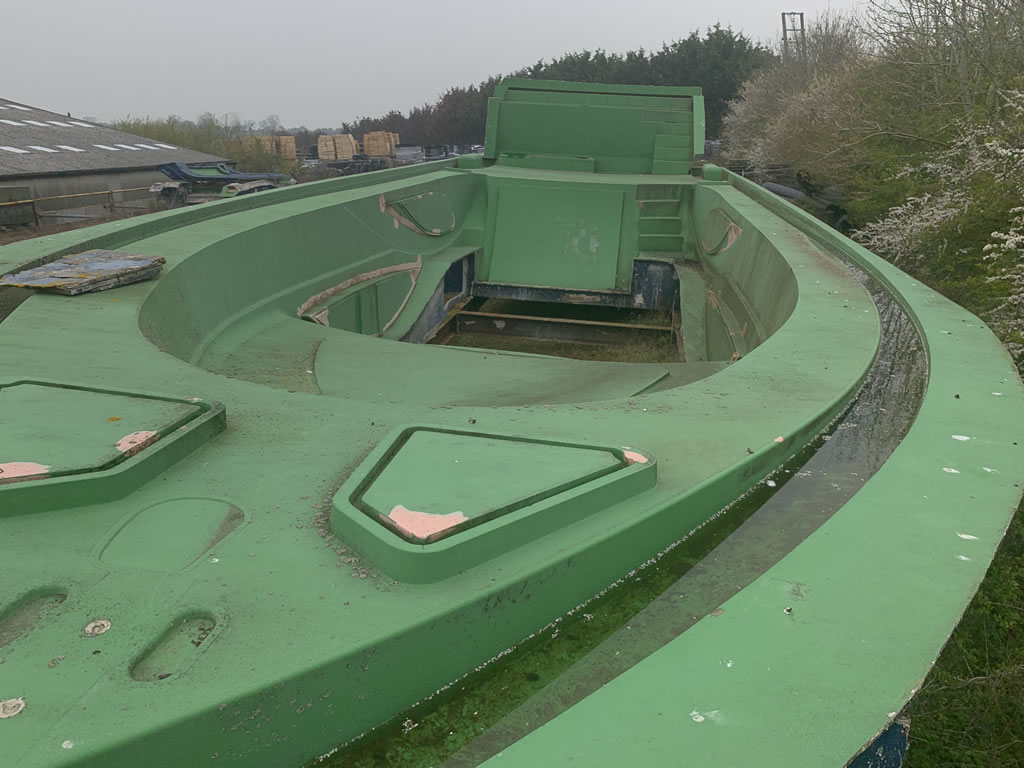 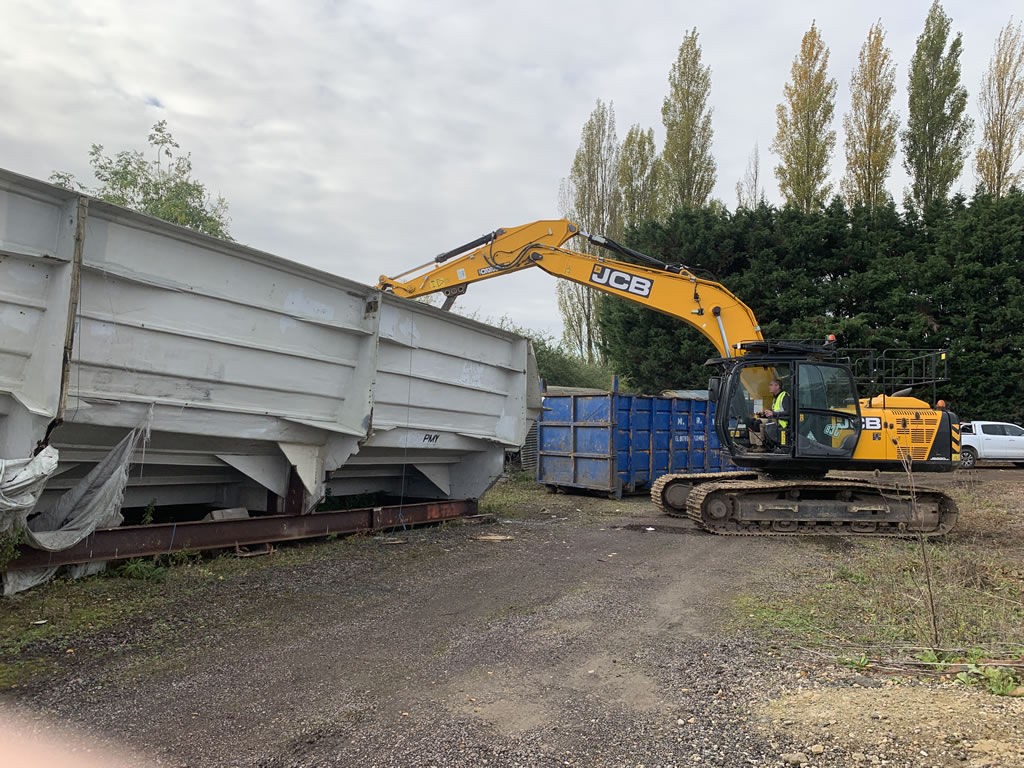 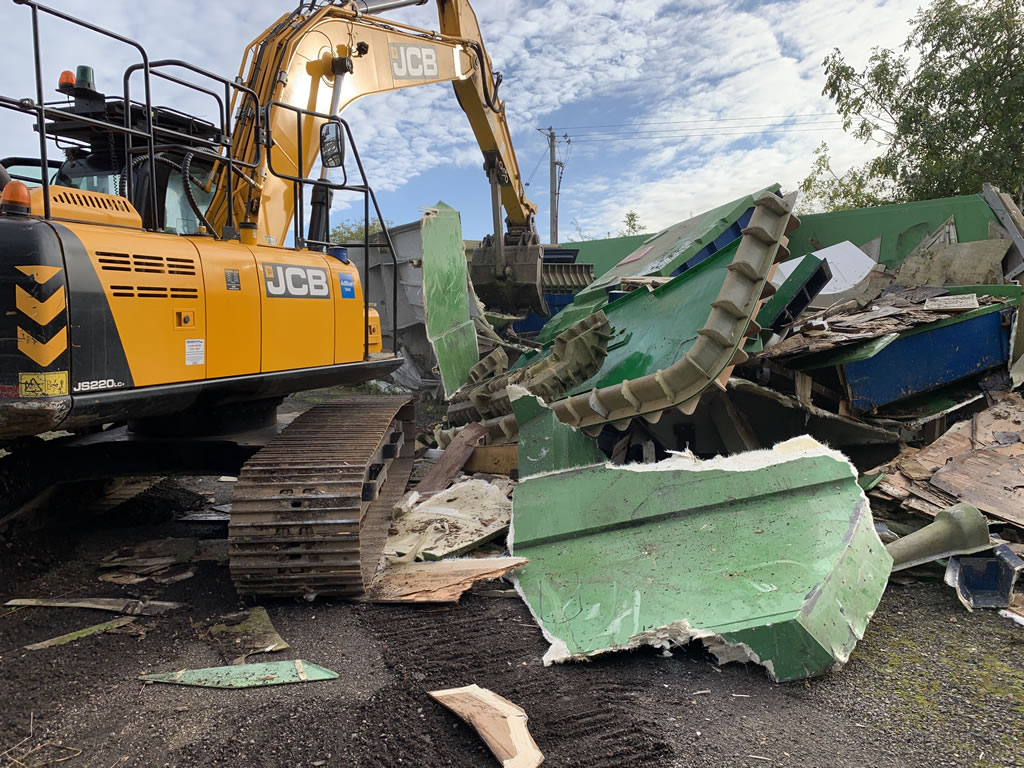 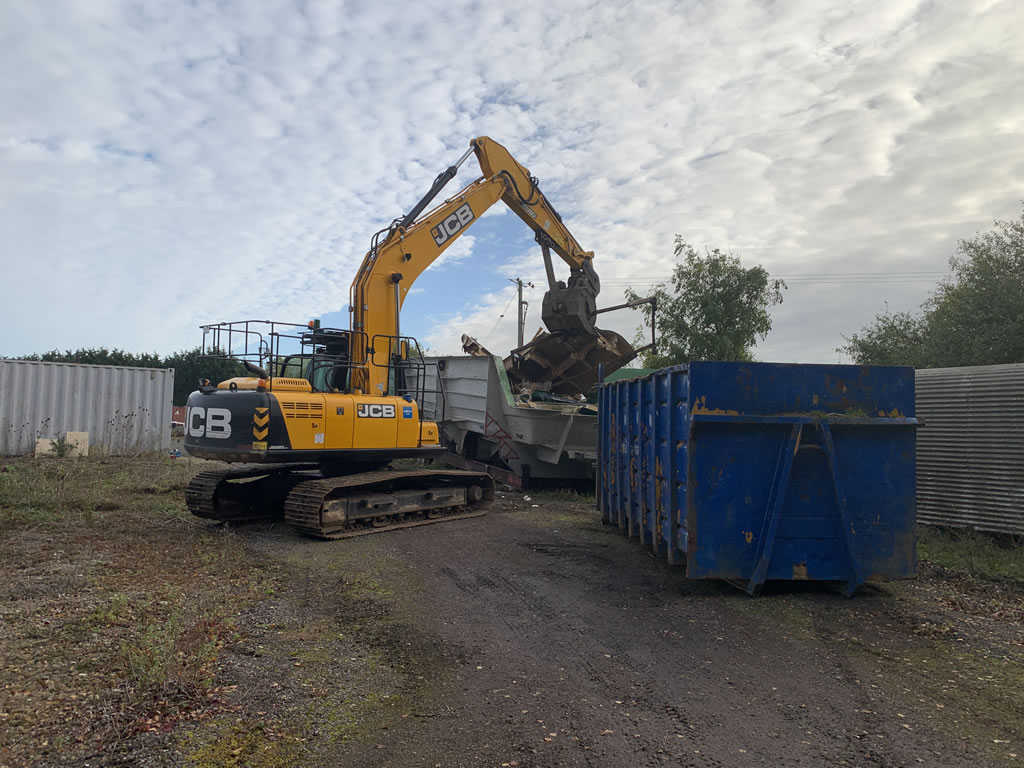 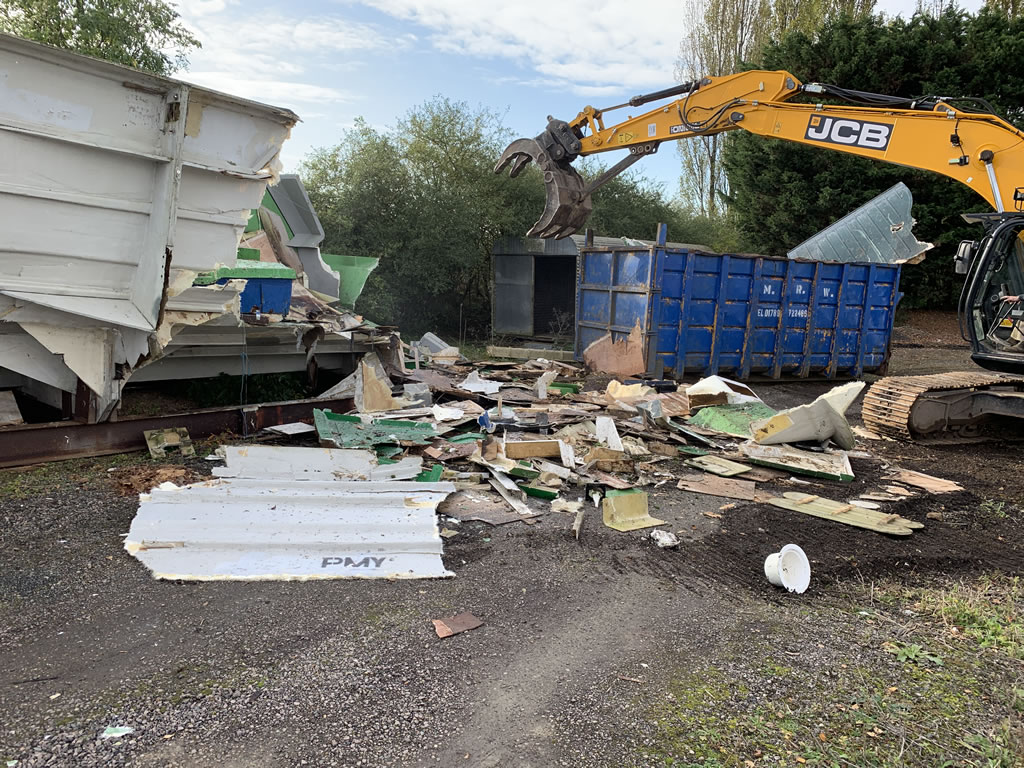 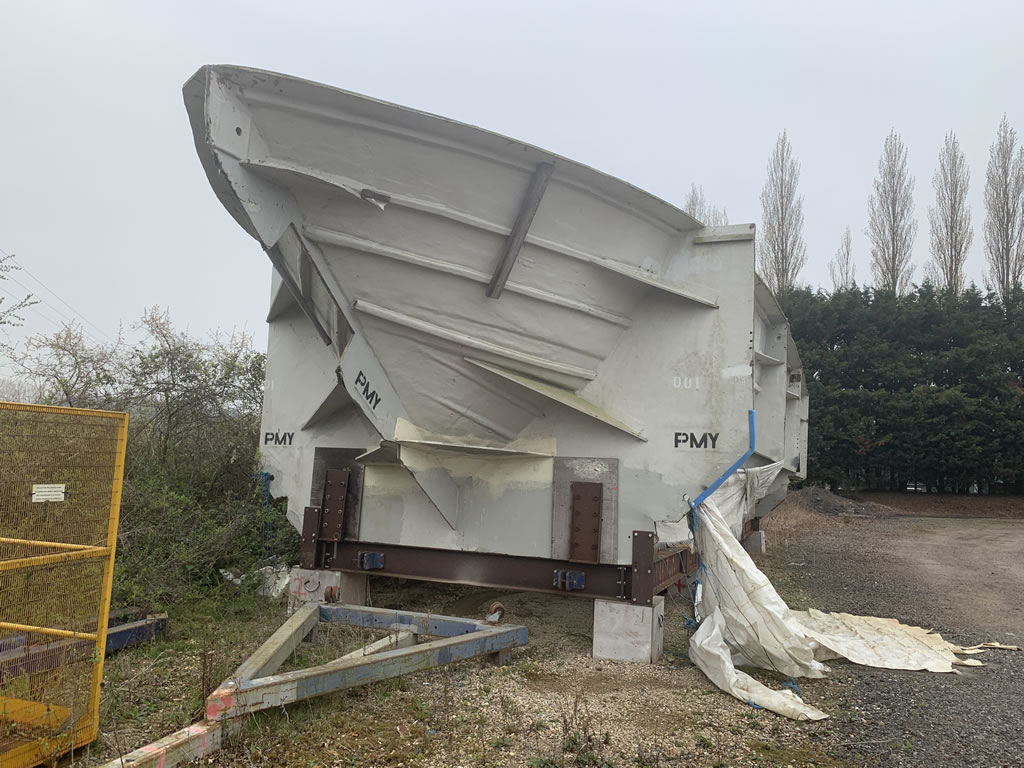 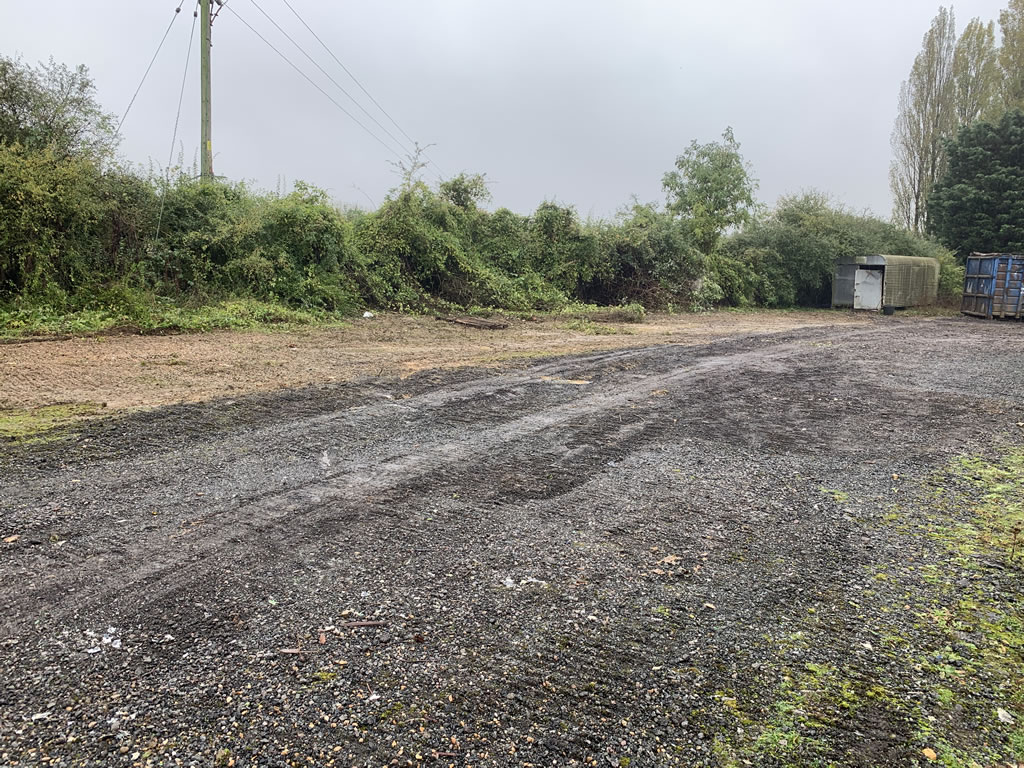 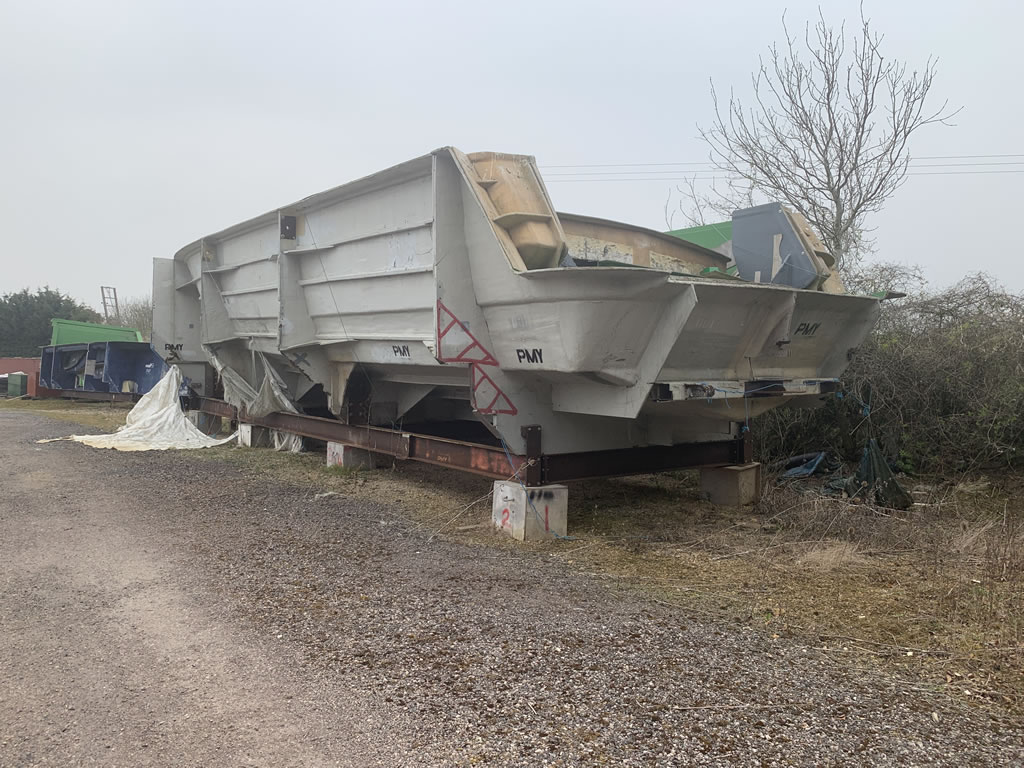 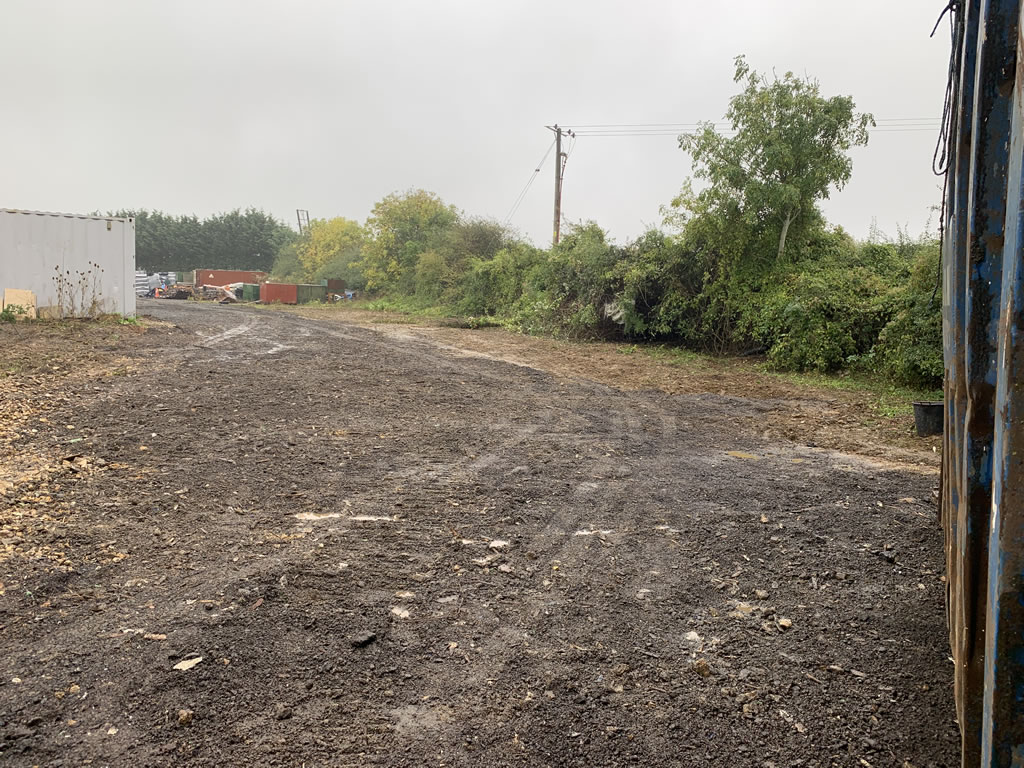