Skip to content
You are here:Home/Portfolio, Scrap a Boat, Scrap a Yacht/The Only Way is Essex: Scrap Yacht in an Orchard
Previous Next

The Only Way is Essex: Scrap Yacht in an Orchard

The only way was Essex for Boatbreakers after the Bank Holiday weekend.

This week the Boatbreakers team hit the road and headed for Essex to dispose of an old wooden yacht that was sitting in a couple’s garden. The boat’s position in the orchard area of the garden meant getting a hi-ab or any heavy lifting gear was out of the question.

Our plan was to take a trailer up with us, chop the boat into parts, load those parts up and take them to a waste disposal centre that we had found locally. With a plan like this which sounds fairly simple there are always difficulties.

We seemed to have unwittingly picked two of the hottest days of the year so we had to make sure we had plenty of suncream and water. And the garden although being very picturesque had some difficulties of its own, these were lots of mosquitos and stinging nettles. It was due to be an itchy job.

One bonus was that the boat was wood instead of fibreglass. It usually means that it’s easier to hammer out the interior and cut the section with minimal mess. Also and dust/bits that we miss in the final clean up stage is natural wood and won’t harm the environment.

We set off from Portsmouth with our cutters, team, tools, tarpaulin and trailer in the morning at around 9am. After some traffic congestion at Dartford and some lunch along the way we arrived on site in Colchester just after 1pm. Once we had manoeuvred the trailer into the property and around the various wood piles we set about stripping the boat down of anything loose and all the rigging.

The initial cut we will usually choose is to get a section of the bow off. It’s usually one of the more tricky parts as you have to keep getting inside and out to make sure all supporting beams have been cut. Thre is also the added difficulty of removing anchors, chains and the pulpit before the cut can be made.

Whilst the initial cuts were taking place our team also emptied the boat’s interior. Anything loose was removed and the wooden structures inside were pulled apart using a hammer. There was some large areas of rot in the boat and it was also clear a family of mice had been living onboard although after seeing the chopping equipment they quickly abandoned ship.

As the first cuts were finished and the nose of the boat was pushed off we made quick progress through the central sections. The idea was to cut down to just above the keels so that they would keep the boat stood upright during the demolition.

By 6pm on the first day we called it a night partly due to the onslaught of mozzie bites. The trailer was loaded up with waste and ready to be taken to the local waste recyclers the next morning. Over half the boat had been chopped and the engine had been exposed ready for removal. 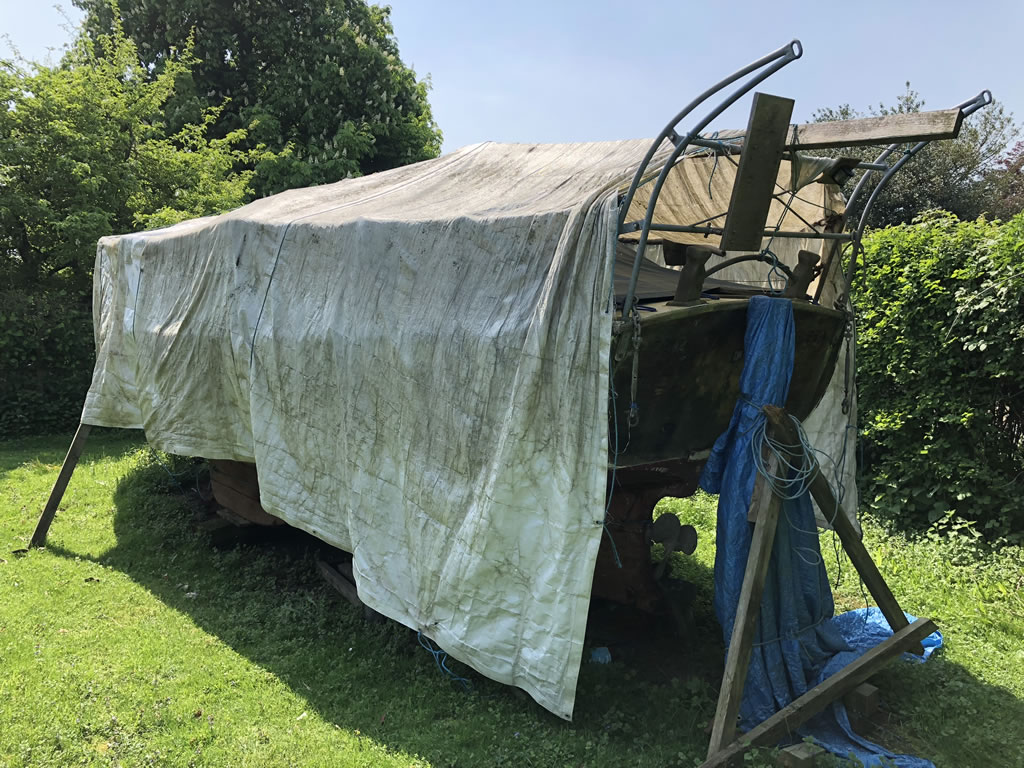 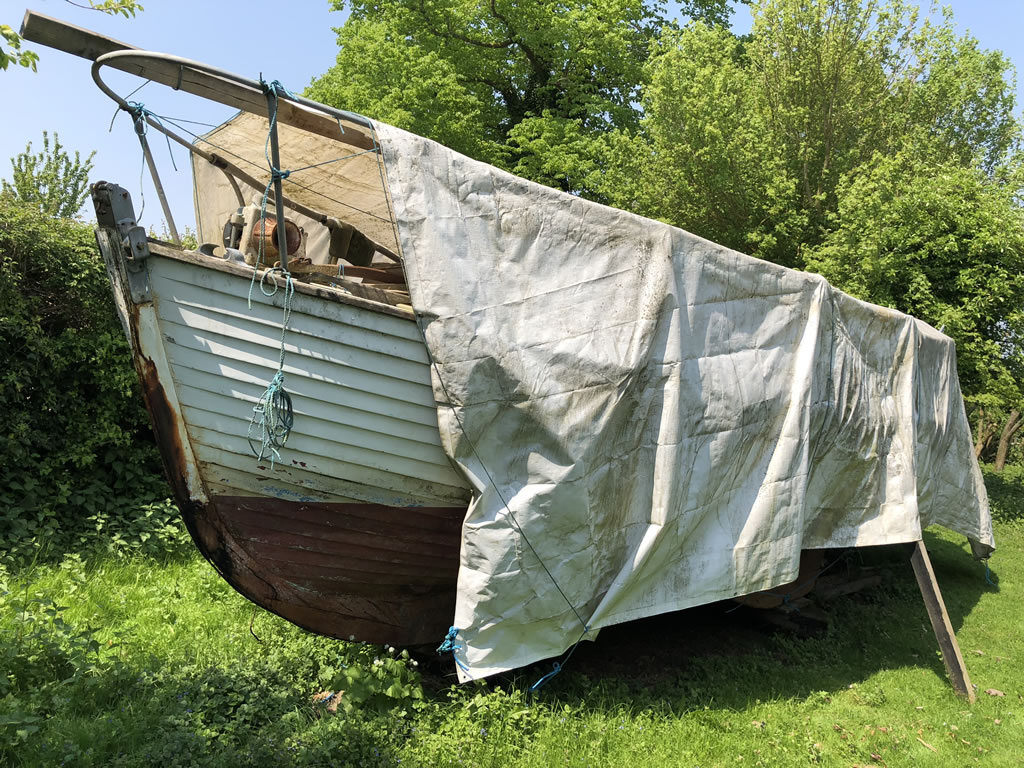 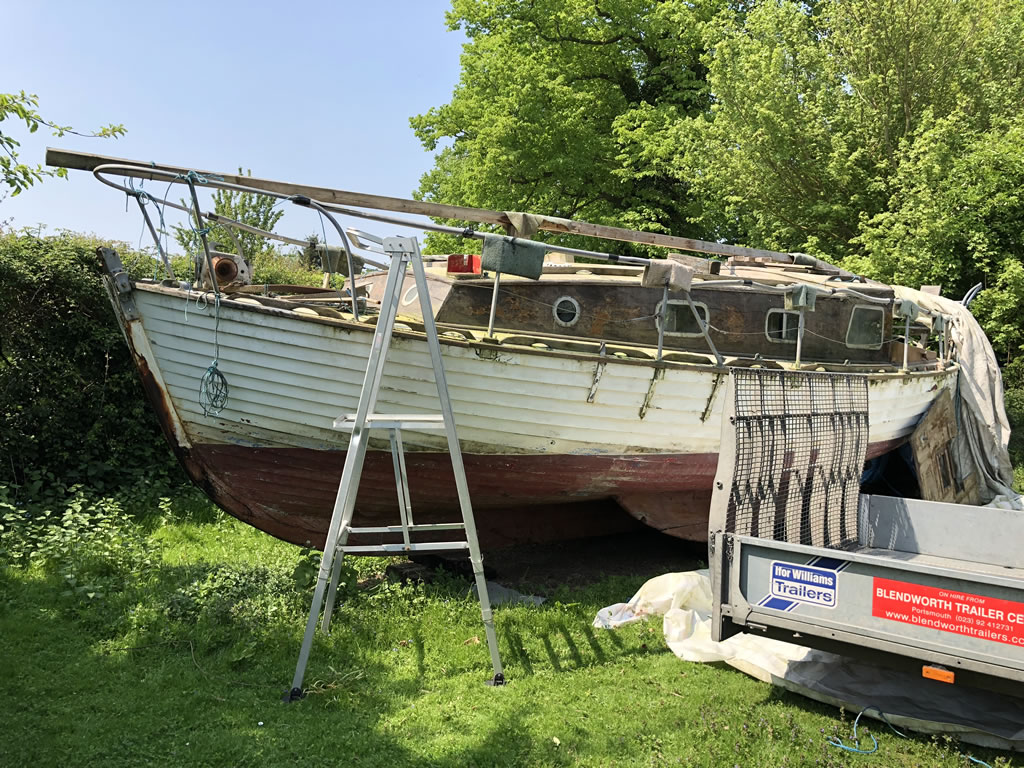 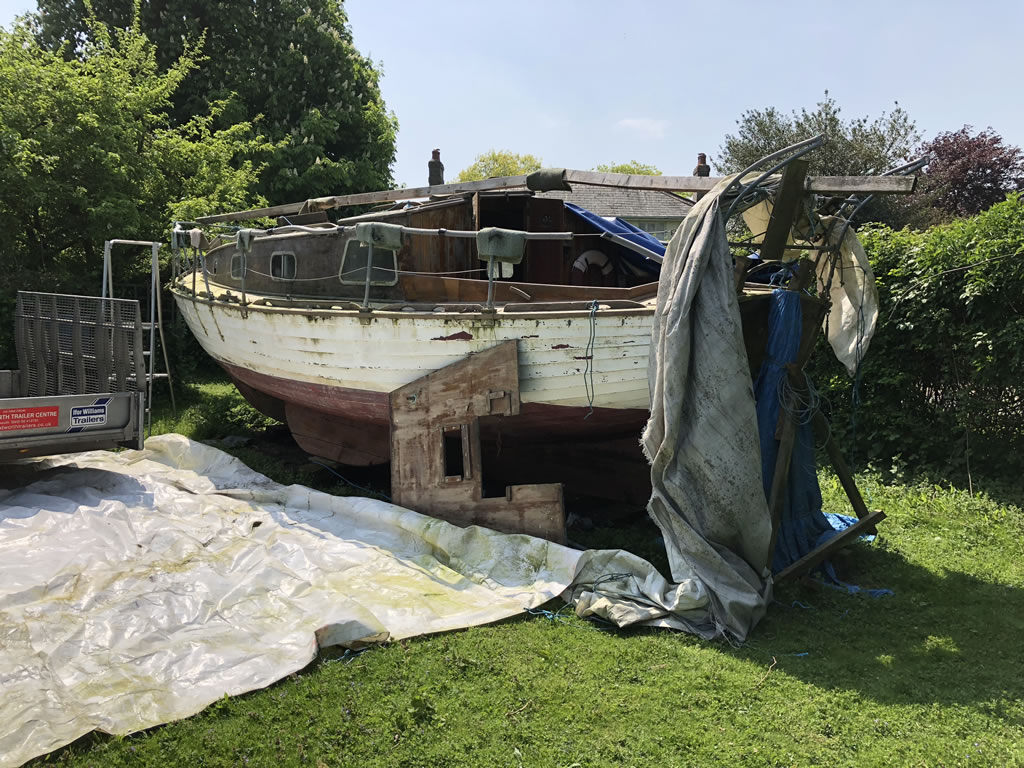 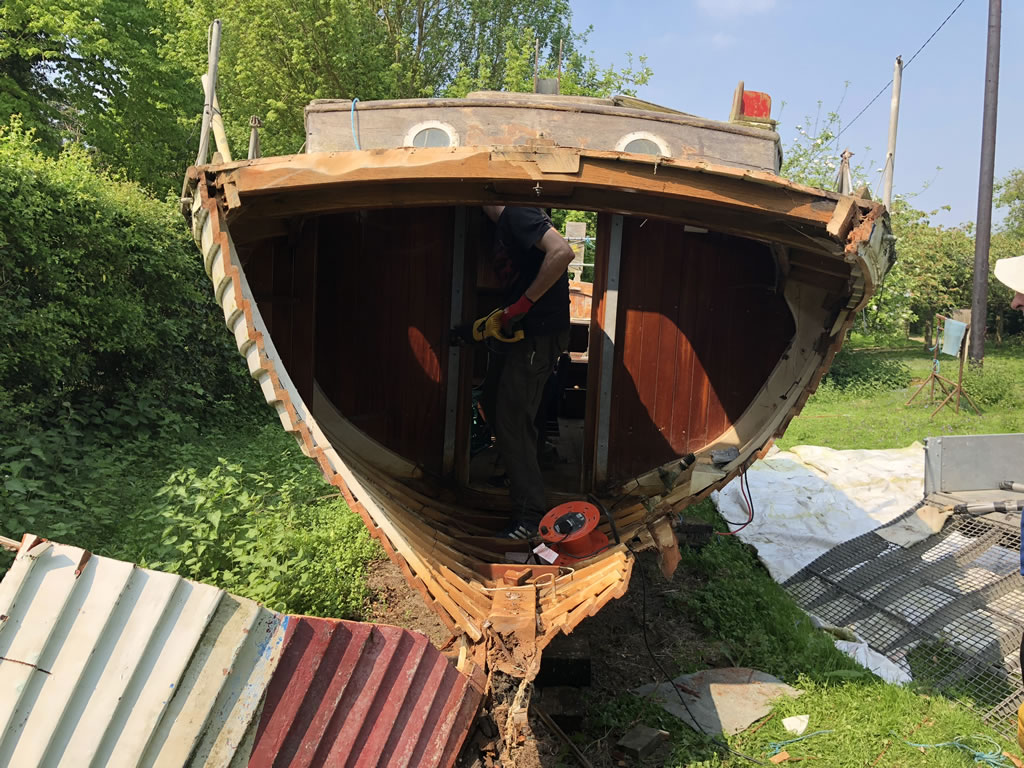 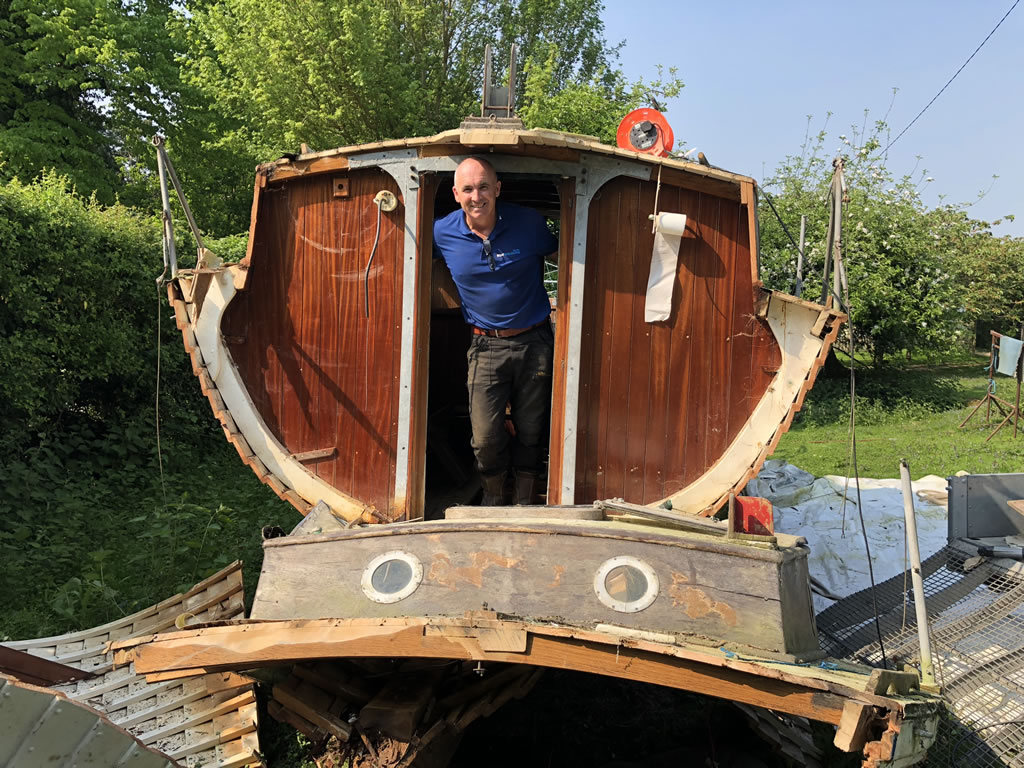 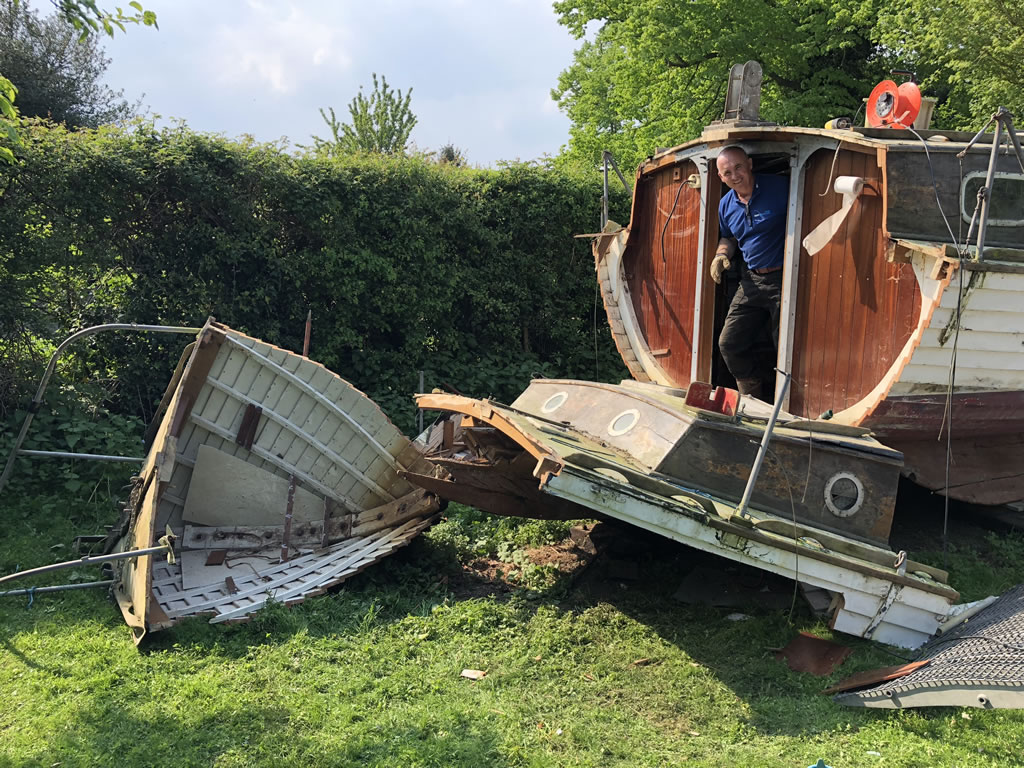 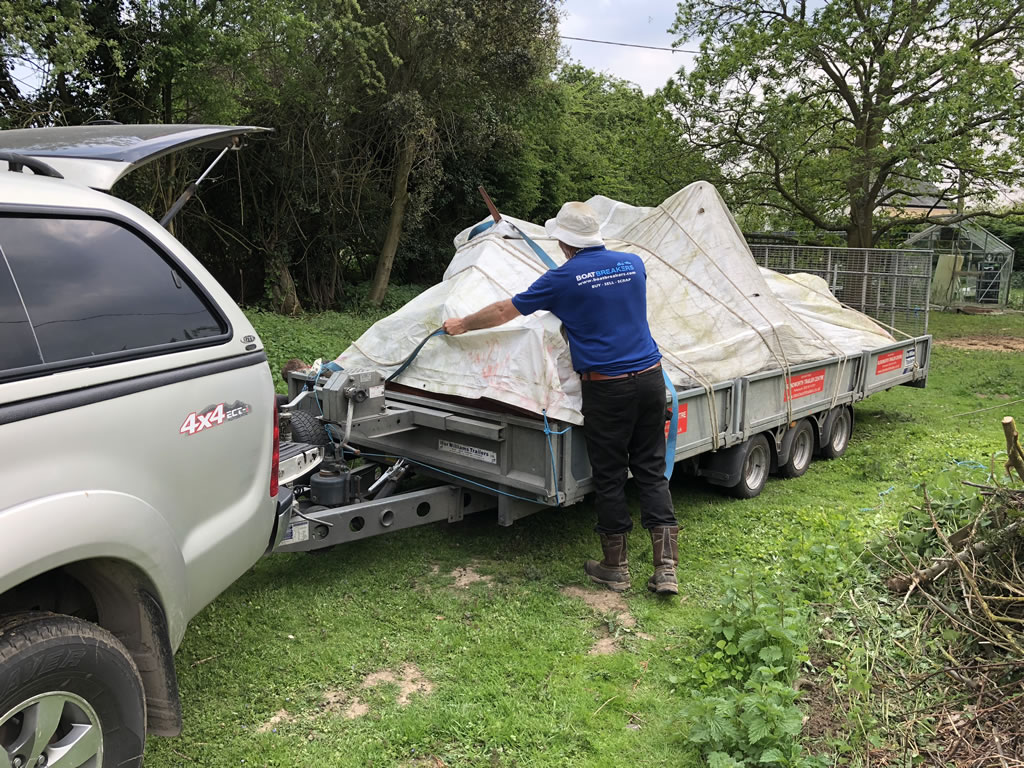 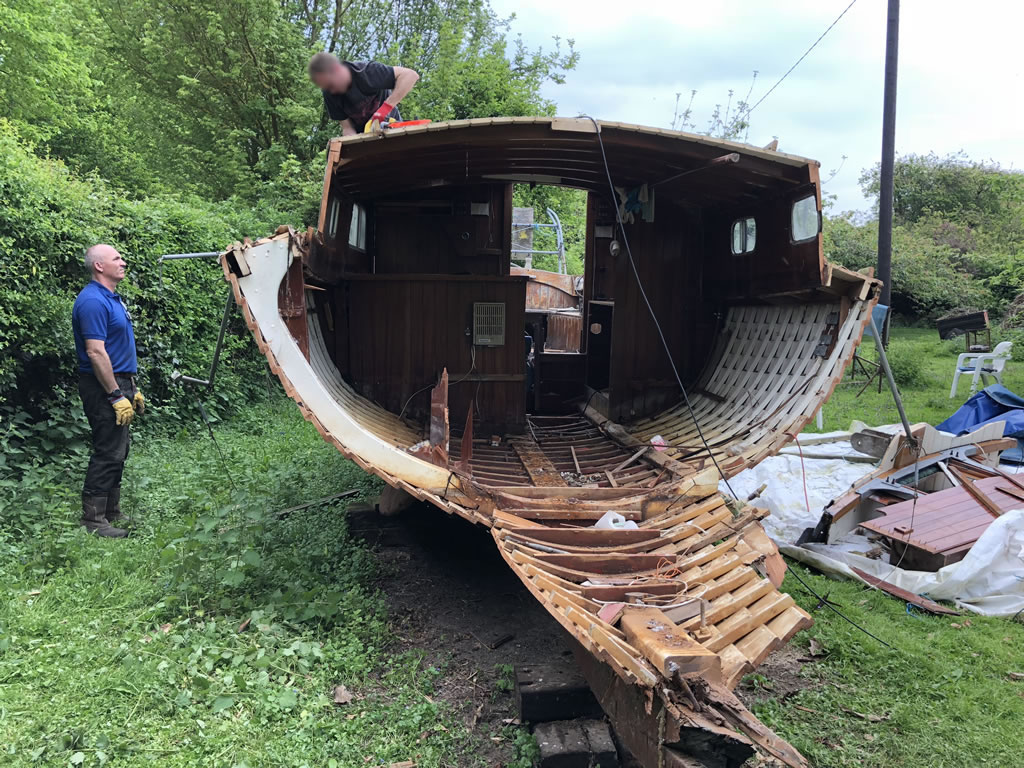 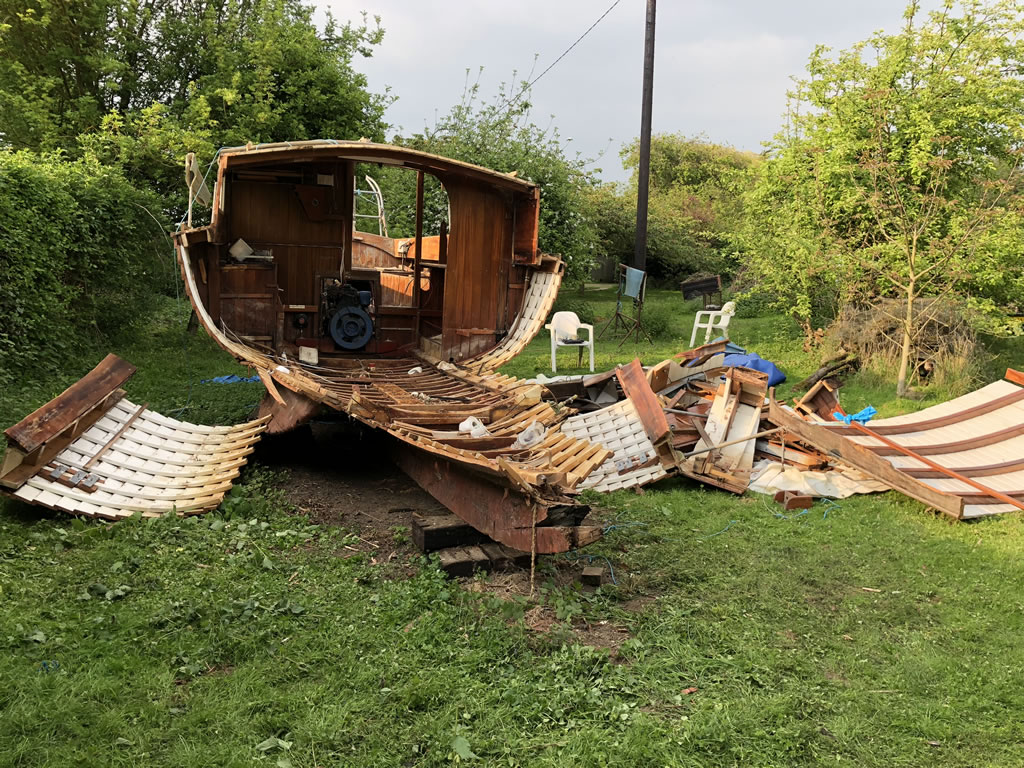 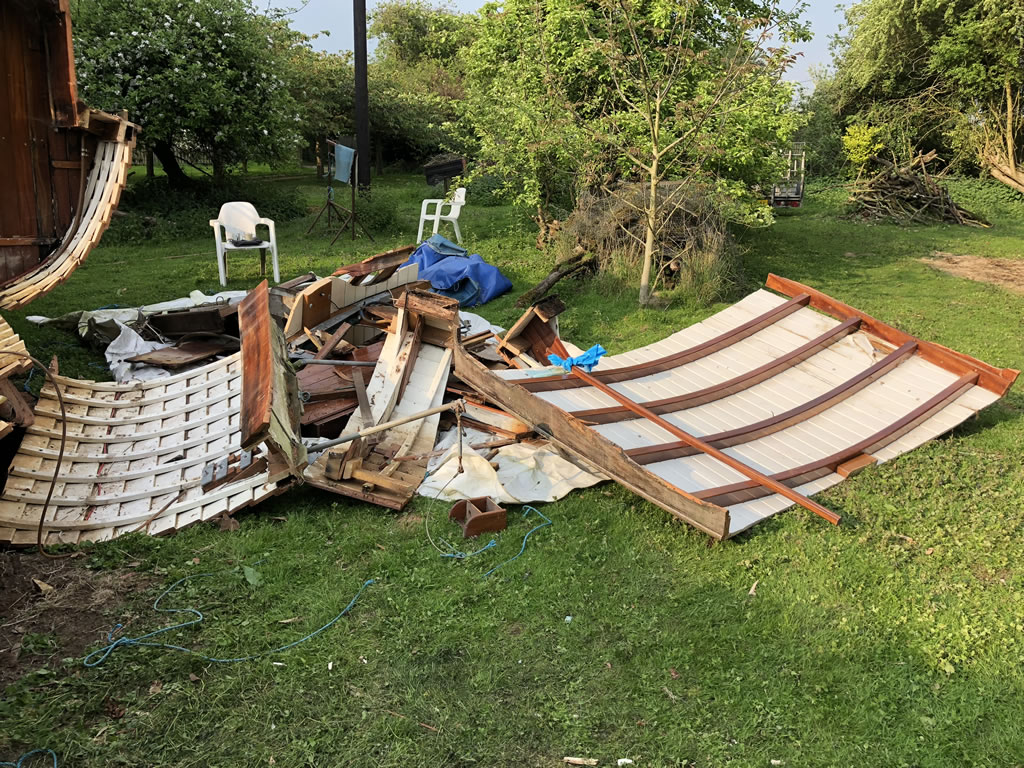 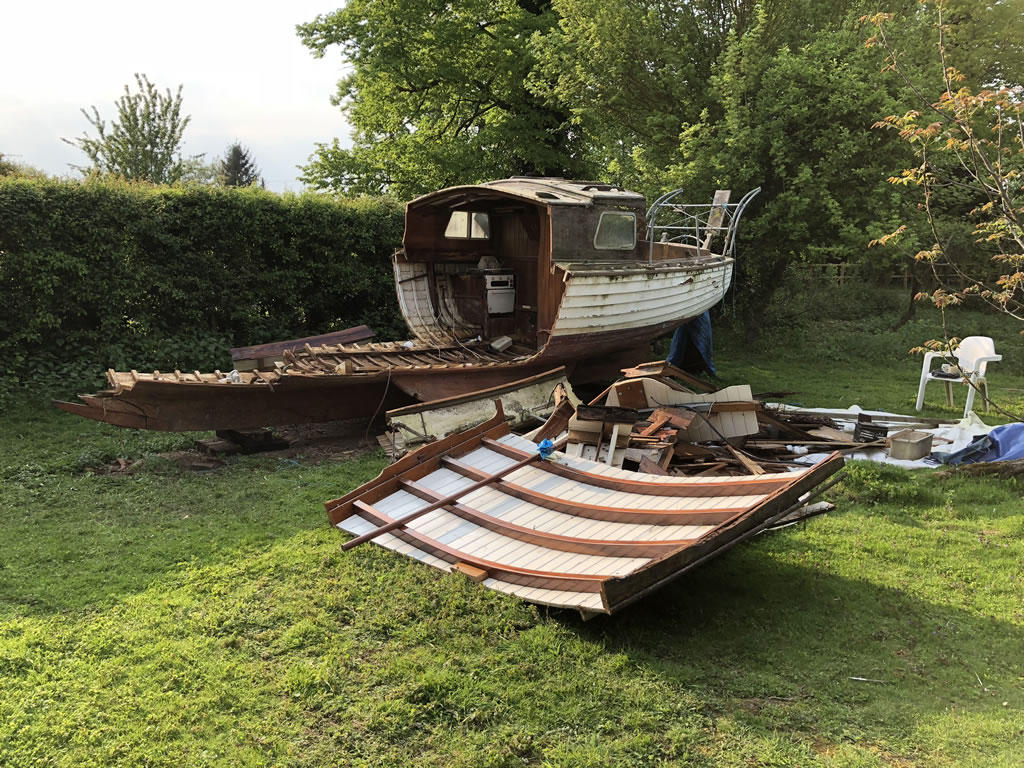 We headed east to our Air BNB (booked during the traffic congestion at Dartford) and to our delight it was a great little three bedroom house with everything we needed, all for £100! Our host advised us to try the local pub on the edge of the River Colne for some dinner and we had a fantastic meal before heading back for an early night. 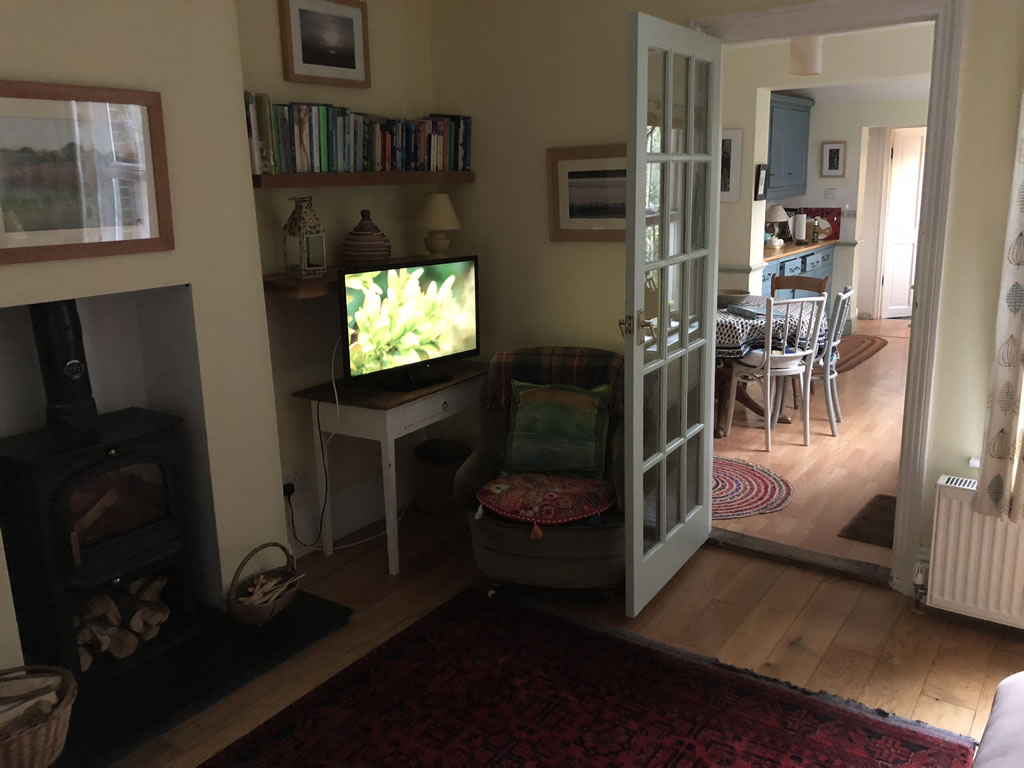 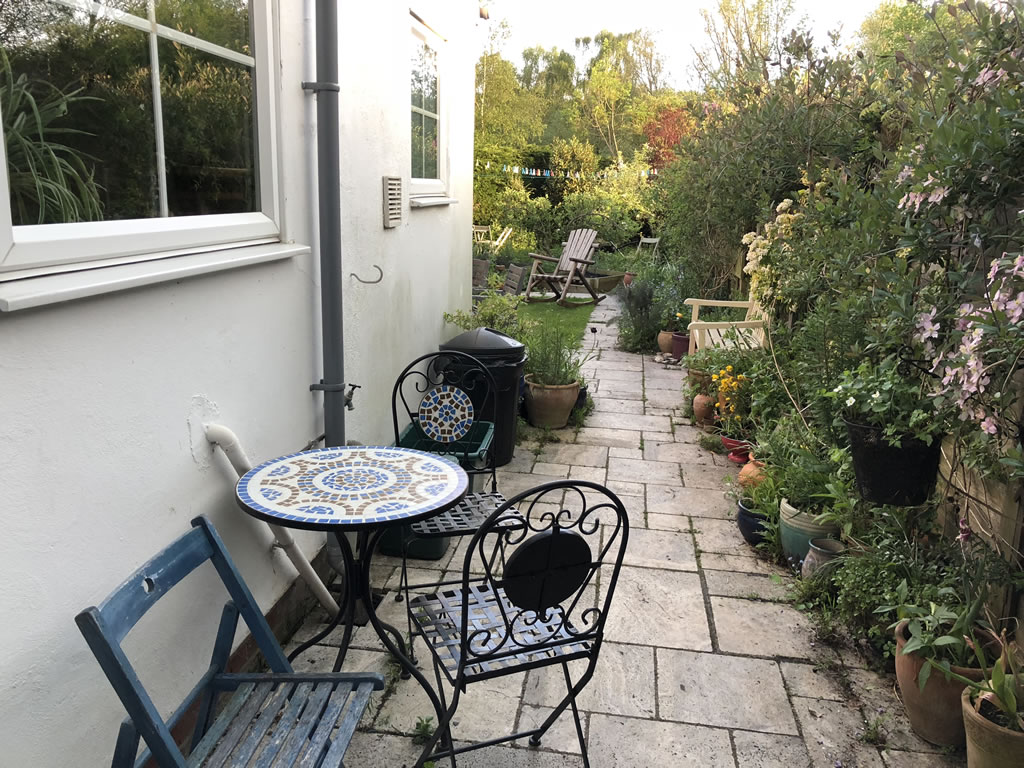 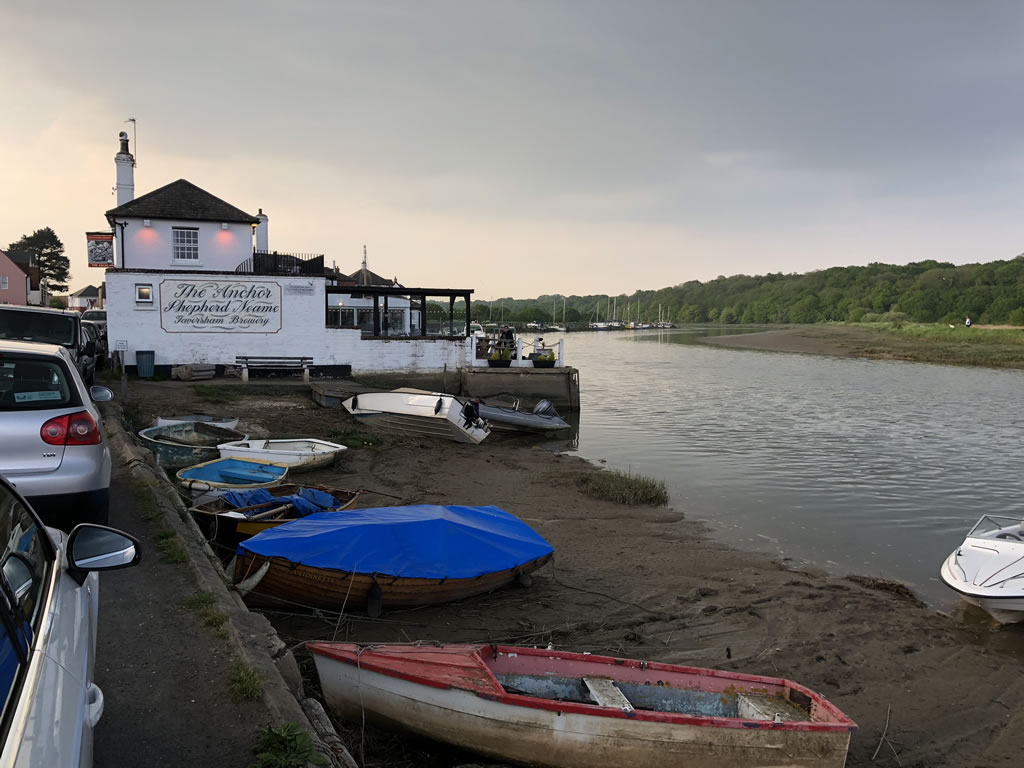 Up at 6:30, quick breakfast and then ready to hit the road by 7:15. We returned to the property and clipped on the trailer. Two of the team went to the recycling centre and the third stayed to chop more parts ready for the next load.

Finding a local recycling centre with a weighbridge was a godsend as it meant we could keep the site clean, clear and most importantly safe as there wouldn’t be lots of waste lying around.

CSH Environmental was out destination and we were really impressed with their yard. It was spacious, well organised, clean and most importantly the staff were friendly and helpful. We had anticipated having to wait a while to deposit the waste but we were in and out inside 20 minutes which was great. In total we visited the yard 3 times and not once was there a queue or long wait…perfection!

When we got back on site there was more boat bits to load which we quickly did. We used some off the curved side sections of the boat to lower the heavy bits onto like the engine. We would drop them on top, line up the trailer and then winch them on using the boat itself as a sledge. Our second and third trips to the tip had left us with just the keel section to deal with.

Whilst it looks fairly straightforward to just winch on a rectangle section of metal and wood, in reality with only some rope and a winch in the hot sun it’s anything but. However, we always find that the more you think something through first it becomes more straightforward.

Again we utilised our sledge procedure and flopped the keel on to a curved section of hull. We also used some metal bars that were with the boat to use as rollers under the keel. Little by little we inched the 1.5ton keel up and onto the back of the trailer before manhandling it into exactly where we wanted it.

By this time (5pm on the second day) the weighbridge was closed so the decision was made to bring the keel back with us to Portsmouth and weigh her in when we returned to our home yard. We quickly set about making sure there was no mess or waste left over as we always like to leave the area as if there’d never been a boat there.

The owners of the boat and property couldn’t believe how hard and fast we had worked to get the job done as we originally anticipated it taking 3 days to complete. It’s always nice to finish early as everyone is happy.

If you have a boat in a garden or awkward place we can usually just have it collected by hi-ab but we are also happy enough to spring into action a come to you to chop her up. 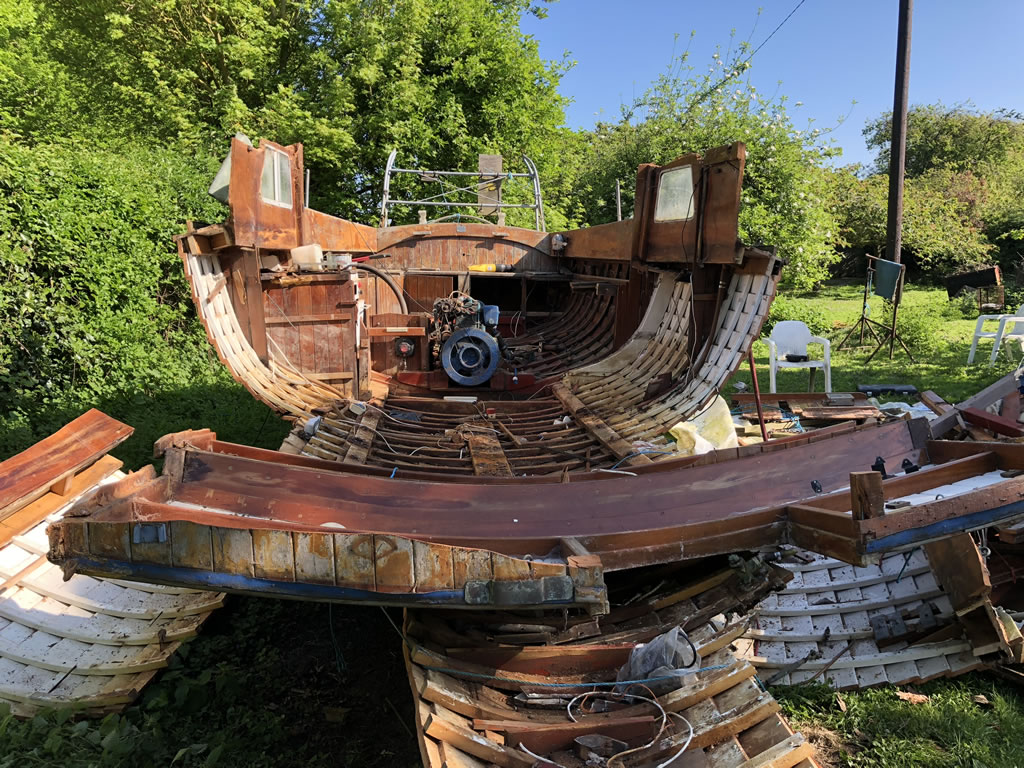 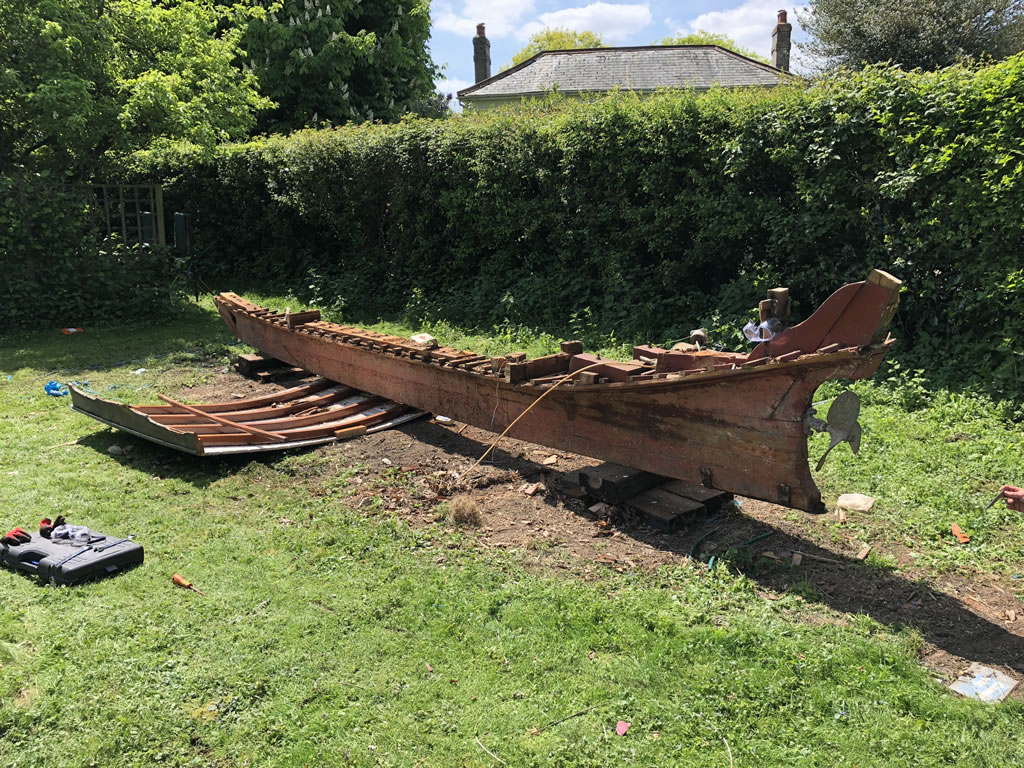 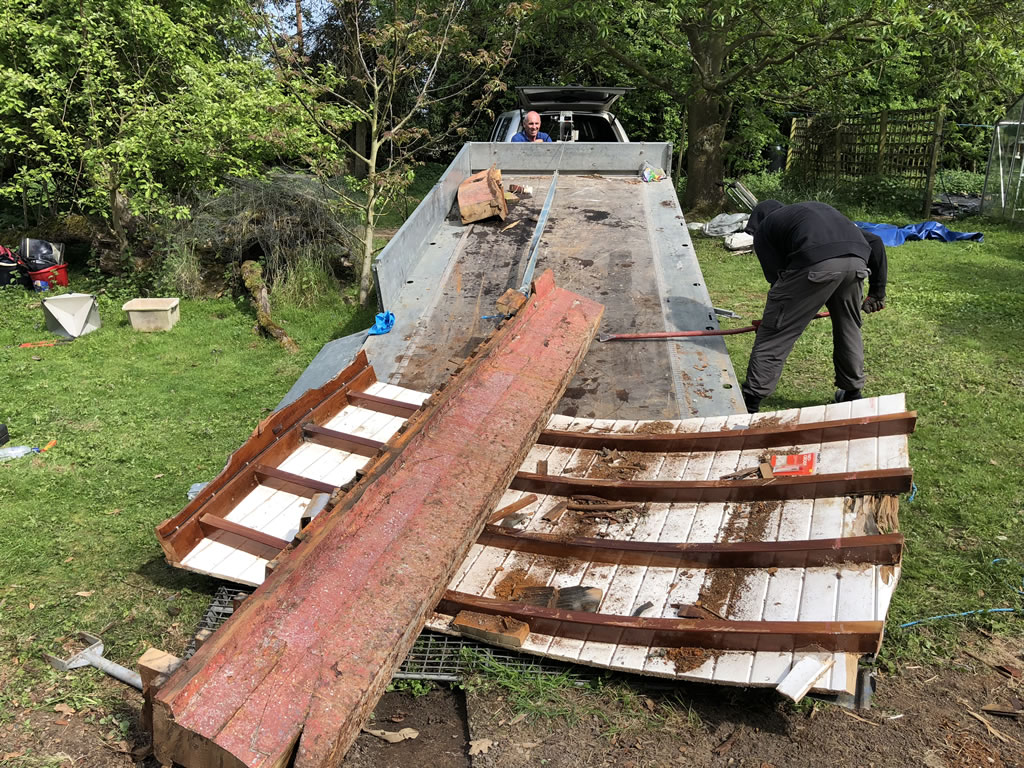 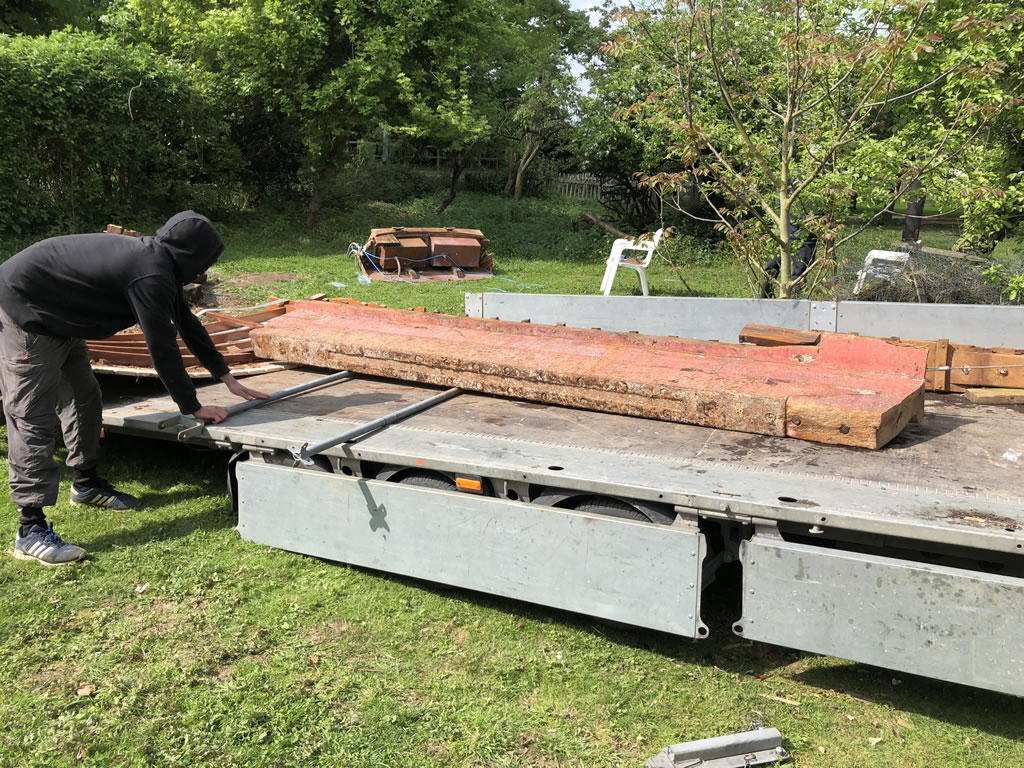 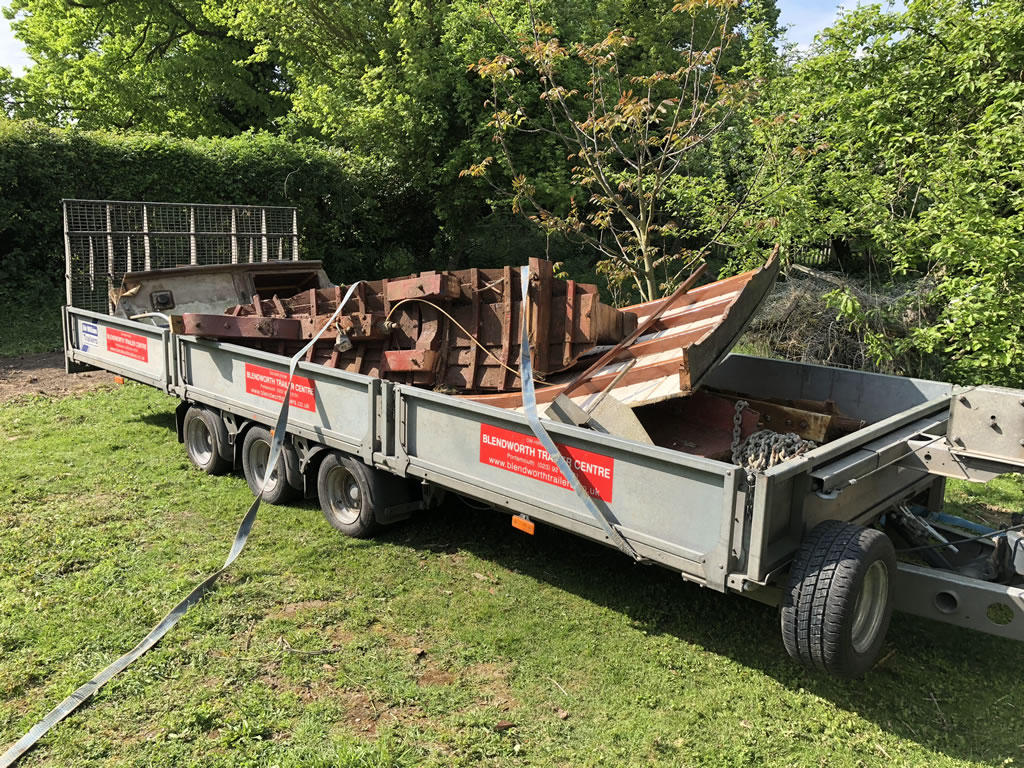 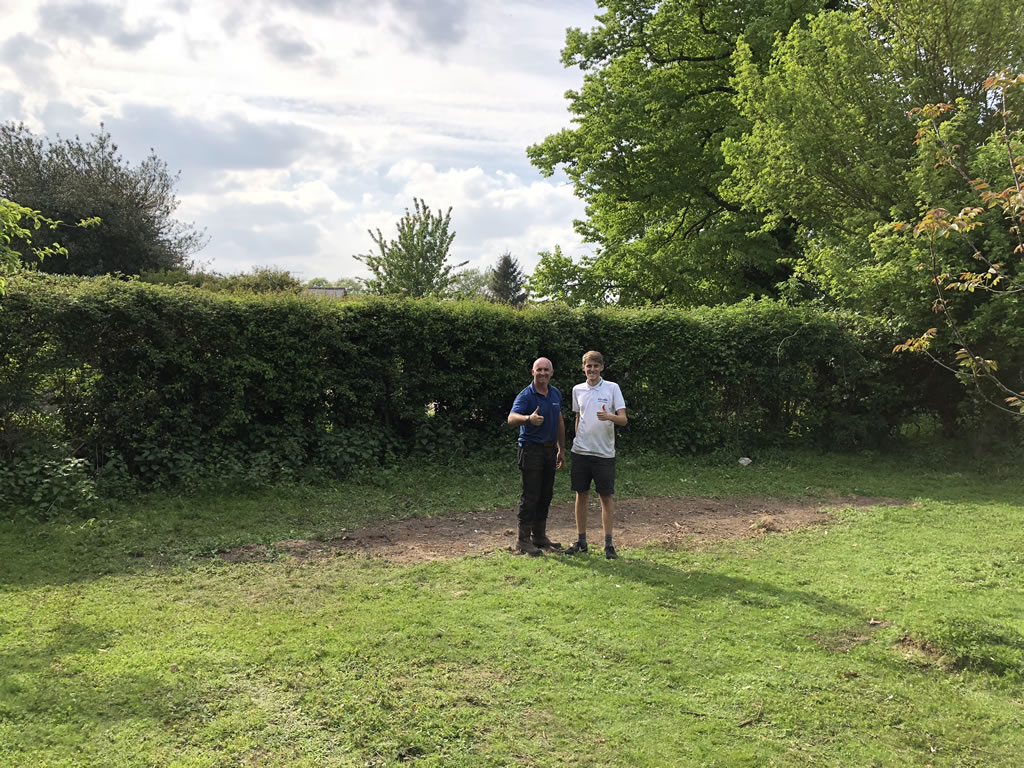 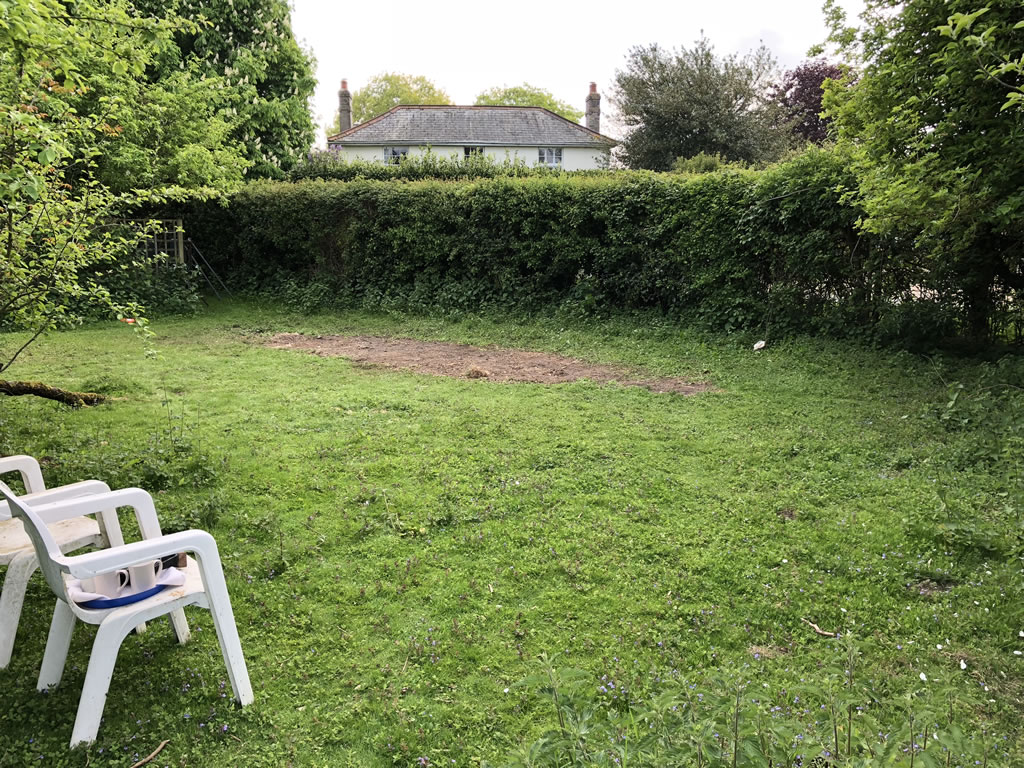 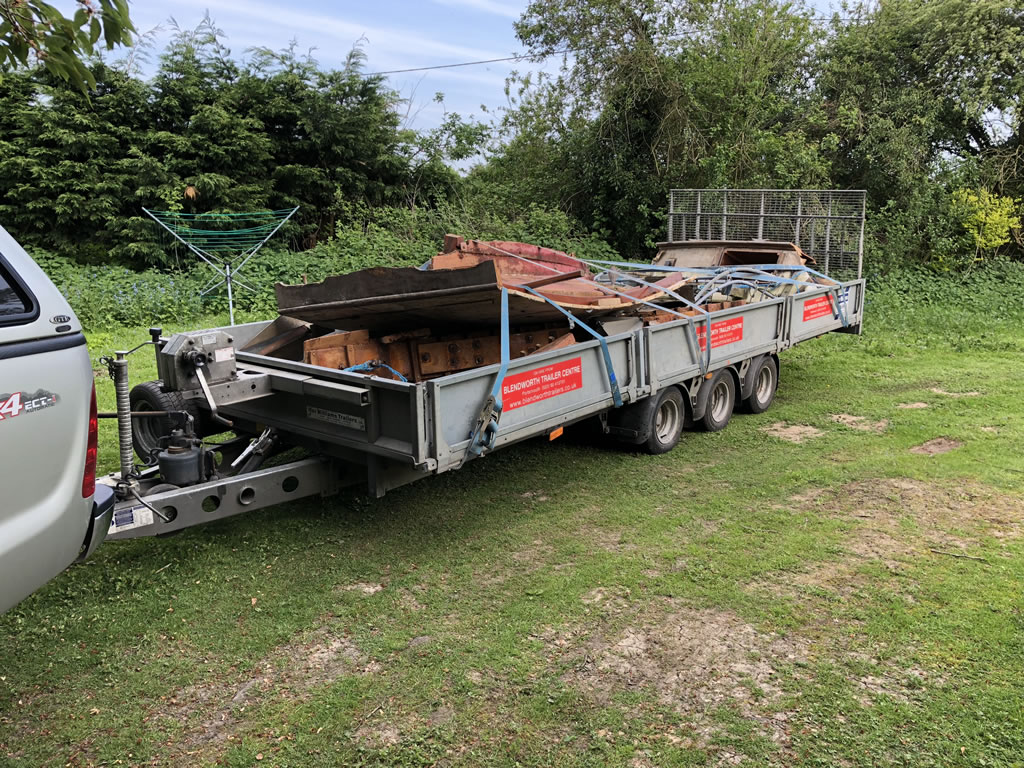