Skip to content
You are here:Home/Portfolio, Scrap a Boat, Scrap a Yacht/Scrapping a Yacht that had never been to Sea
Previous Next

Scrapping a Yacht that had never been to Sea 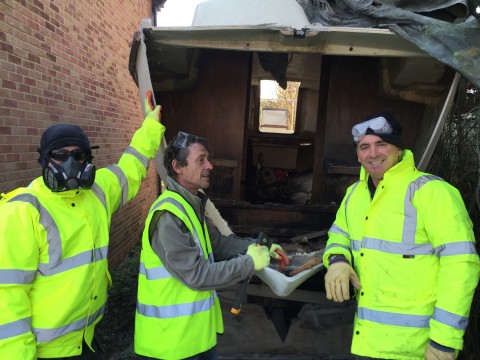 It’s always a shame to see boats that are left abandoned and therefore destined for the chop. With most boats that we dispose of at Boatbreakers it’s usually a case of they were used extensively once but over the last few years the costs and effort needed to keep these boats going has been too much for the owners. Or sometimes it’s the case that owners can’t get down to visit their boat for a month which then becomes and year…

However our most recent yacht that we scrapped, which was a home build, had never actually been to sea. It has travelled around Europe from driveway to driveway. In all fairness she did cross the Irish sea but that was being transported on the ferry.

Her final resting place was in Bordon, Hampshire, and she’d become a local landmark for over 30 years. We got the call back in the summer of 2015 and again in February 2016 that it was finally time for the boat to go and free up some space along the side of the house.

The boat was a 24ft Colvic Springtide, and luckily for us because it was a home-build that had never made it to sea the interior didn’t have many obstacles for us to cut around, she really was a fibreglass shell with some wooden panels. When we chop boats up it’s always the case that the fewer the number of bulkheads the better.

Our team arrived early on day 1 to clear the site and lay out the covers that we would collect waste materials on. We trimmed away some branches on the overhanging holly tree, cut away the rotten old covers and made some drainage cuts to release the considerable amount of water that had collected over the years. We also smashed away the flimsy interior wood work to leave us the fibreglass hull to cut.

The first point of attack on the boat is usually at the bow. Once the front sections are cut away this allows you to look through the boat and see any interior structures that then have to be dealt with. 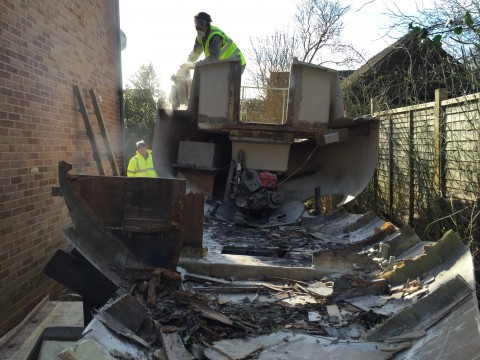 From there we work from stem to stern leaving the keel until last. In this specific cut we were fortunate that the boat was housed in an old cradle which gave the boat good stability throughout the process. All we had to do was make sure we didn’t cut away areas of fibreglass that were next to the cradles supports and the boat remained safe and stable in the cradle.

The whole process would have been made much more simple if the old cradle hadn’t lost a wheel and partially sunk into the earth. If it was still moveable we could have dragged her into the front garden, lifted the boat and cradle in one piece and taken her away to be chopped.

After a couple of hours we were making good progress and almost half of the boat’s topsides were now neatly piled on the front garden. We then realised that we had forgotten something! In our rush to beat the morning traffic out of Gosport we had not picked up our boat straps that we used to lift and pull heavy parts of the boat. One of the team jumped in the van and went to collect some. In the ten minutes this took a minibus for the local retirement home had pulled up and then broken down right where we had our van parked. Whilst we could work around the new obstacle for now we couldn’t have it in the way when the big grab lorry came to collect the waste.

Fortunately for us after a few phone calls the van was recovered and we could proceed with our original plan for the job. The next thing to go was the engine, apart from the keel it was the heaviest part of the boat, but once we had freed it from it’s position we manoeuvred it to the edge of the keel and let gravity do the work. Underneath we had a section of fibreglass waiting which then worked perfectly to be able to slide the engine to the pile of waste.

With all the excess boat now cut away and the engine removed then tried to strap up the keel and pull her using our van. Like all scrap boats this one didn’t go quietly and it soon became clear we’d need something bigger to pull her up the garden. We also were asked to chop up an old dinghy which in comparison was like putting a hot knife through butter.

At the end of Day 1 most of the boat had been cut away and we were only left with the keel in the cradle and a pile of fibreglass on the front garden. 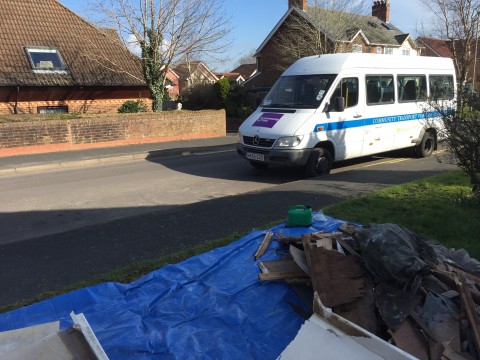 Day 2. One of the most satisfying parts of the process is when the grab lorry arrives to come and collect the pile of waste. Within minutes the large pile of boat was smashed and compacted into the back of the lorry. Along with the boat waste we also helped the home owners to clear a number of items from their garage.

During day 1 we were unable to cut through the keel due to the nature of the material inside the GRP shell. There was a mixture of metals, hard woods and cement which meant we couldn’t quite get our cutting gear through.

We had hoped that our grab lorry would be able to do the trick but although it managed to drag the cradle and keel up the garden it wasn’t safe to lift the keel all in one go. At Boatbreakers we’re alway prepared and we always know someone with a bigger crane. We assured the home owners that we would be back with reinforcements and after a couple of days we had our friends at Danny Mears Transport come and lift the keel and cradle with his much bigger crane.

Danny had no trouble with it and the garden was soon clear, the keel followed the rest of the boat to the scrapyard where any materials that could be recycled were and the GRP was broken down before going to landfill. Unfortunately until a viable solution for the repurposing of GRP it must end up in landfill. Make sure you watch our videos for both a full and high-speed run down of each and every scrap job.