Skip to content
You are here:Home/Portfolio, Scrap a Boat, Scrap a Yacht/Moody 27 Yacht Disposal in Devon
Previous Next

Our most recent boat in to be scrapped was a Moody 27 Yacht which was collected from Darthaven Marina. It’s always a shame to scrap and dispose of sought after boats like a Moody. This Moody 27 yacht had been left untouched for around five years on her River Dart mooring.

She had recently been lifted out for a survey which had flagged up large amounts of osmosis. Whilst osmosis doesn’t sink a boat it does lead to lots being scrapped. For the simple reason that it makes the boats hard to sell on. Osmosis repair bills run into the thousands and can kill any deal to sell a boat as it’s something that takes time and money to sort.

It was a tricky collection to arrange as we had a number of stages to sort. First of all the boat was at Noss on Dart Marina. In normal circumstances the boat could have been lifted and loaded at Noss. However the marina are currently having work done so there was no chance of a lift. We therefore needed to get the marina team at Noss to tow her down to the neighbouring marina at Darthaven. The team at Noss were extremely helpful with getting the plans off and running.

Secondly the next box to tick was getting the mast down. As is the case in most boat yards they required us to use the local rigger. Once again the local rigger, like the team at Noss, was extremely flexible to the plans. The rigger even agreed to carry out the work for free in return for some of the boat’s rig. Usually we might sell the boom or the rig but as it was the owner’s bill to drop the mast we thought it would be fair to save him some money.

After that it was the boat lift out that needed to be sorted. Again the marina team this time at Darthaven were extremely easy to deal with. Finally we had to make sure that the lorry that would transport the boat was there waiting. For this job we used our friends at CBH Specialist Transport. Their local knowledge and contacts in the area were invaluable in the process.

After that with the boat loaded it was time to transport her back for disposal. The cost of transporting a scrap boat is always a forgotten cost for boat owners who are looking to scrap. In other words transport companies don’t give any sort of discount just because the boat is going for scrap. And to be honest why should they as it’s still the same time diesel and effort.

If you have an old boat that has been sat in the marina accumulating storage fees for a number of years. Or maybe it’s a boat that you just can’t seem to sell. Just fill in our Scrap Calculator and we can help you escape the trappings of owning an old unwanted boat. 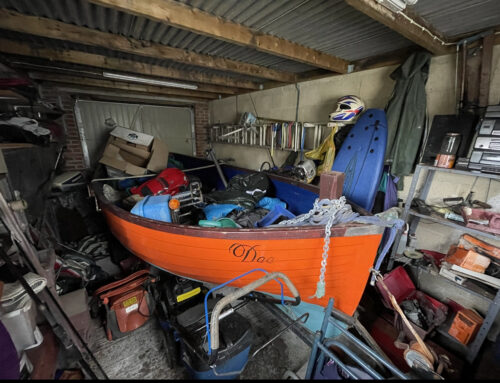