Skip to content
You are here:Home/Abandoned Boats, Portfolio, Scrap a Boat, Scrap a Yacht/Abandoned Yacht Disposal for Sailing Club
Previous Next

Our Boatbreakers team were back out on the water in Portsmouth Harbour last week. We had received a call from a local sailing club to ask us to remove an abandoned boat from their moorings. The boat in question was a small Corribee 21 Yacht with a damaged mast.

According to the sailing club the boat was abandoned with them some time ago. In recent storms it had been damaged and the mast was now down on her port side. Consequently the fallen mast had since rubbed a hole in the deck over the months she’d sat there.

There was some concern that the boat may sink on the mooring. This would mean the recovery would be more difficult and ultimately more expensive. The Sailing Club had taken ownership of the boat so they could authorise the disposal.

Our plan was to take a work boat up to the moorings and retrieve the abandoned boat. Then tow her to Gosport Boat Yard to be lifted onto transport.

The weather in the morning of the collection wasn’t great. It was wet and windy but the forecast did suggest conditions would improve closer to lunch. The team set off at around 10:30am and started making our way up the harbour towards the boat.

Our only concern for the job was that we knew that the mast would need to be lifted back onto the boat. However on a small yacht like a Corribee the masts aren’t really too heavy.

Stuck in the Mud

When we reached the boat’s mooring we could see that the mast was not only down but stuck in the mud. Once we had secured ourselves to the boat we made our first attempts to lift the mast. It was clear that it was sunken deep into the mud.

We quickly changed our approach as we needed more power to help lift the mast. The mast was still attached to the boat by her rigging. So we attached a couple of lines where we could and the began to tow just sunken end of the mast.

With a bit of persuasion the mast was freed from the mud and we managed to haul it up onto the abandoned boat. The thick black mud that was churned up was a bit of nightmare and went everywhere. So we did our best not to walk too much mud back onto our work boat.

After the mast was secured on the yacht the rest of the process was relatively straightforward. The Corribee was tied alongside the workboat and gently towed back to Gosport Boatyard.

Gosport Boatyard’s team lifted the boat out of the water and onto the waiting Hiab truck. The boat was then delivered to the scrapyard in Portsmouth. Our team quickly removed any recoverable items and the rest of the boat was crushed.

If you have an end of life boat or you are a member of a club who has had a boat abandoned on the moorings then get in touch. Just use our Scrap Calculator to give you an idea of the disposal cost to scrap your boat.

Just fill in our Scrap Calculator and we will send you a Free no-obligation quote of the costs involved. 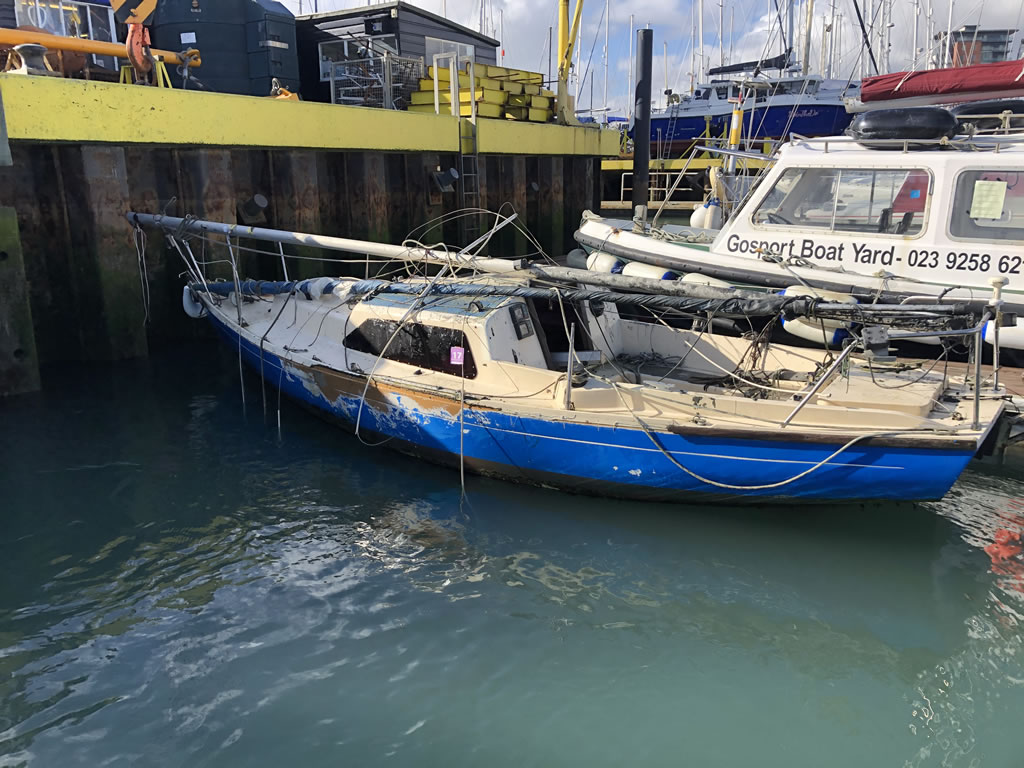 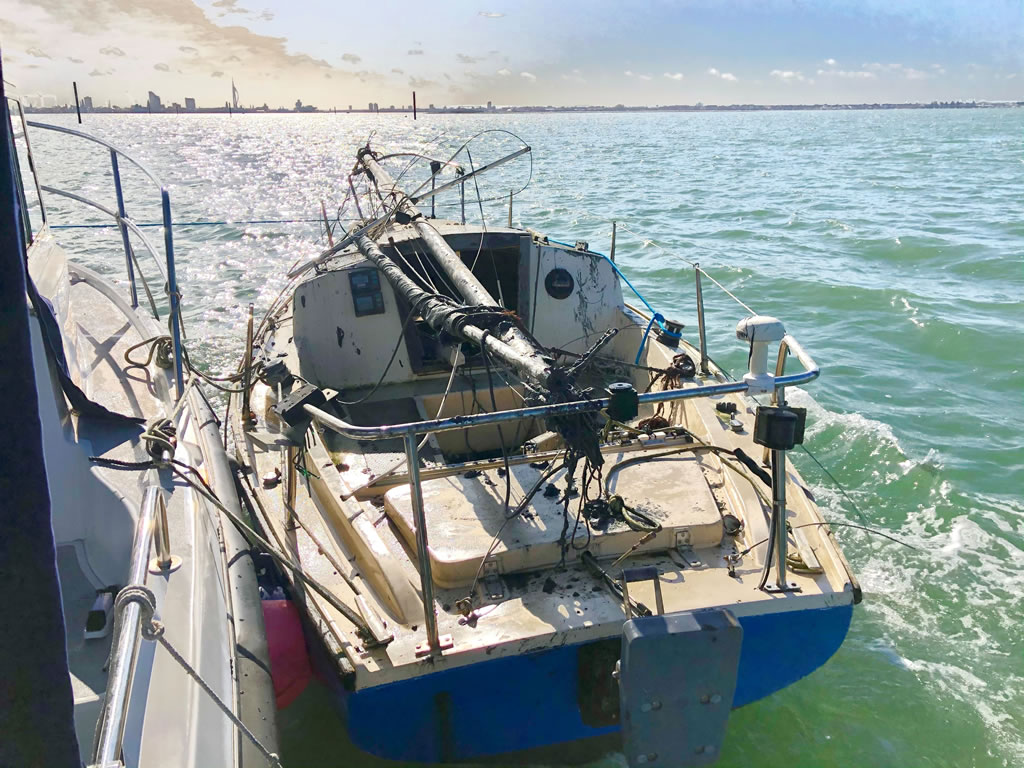 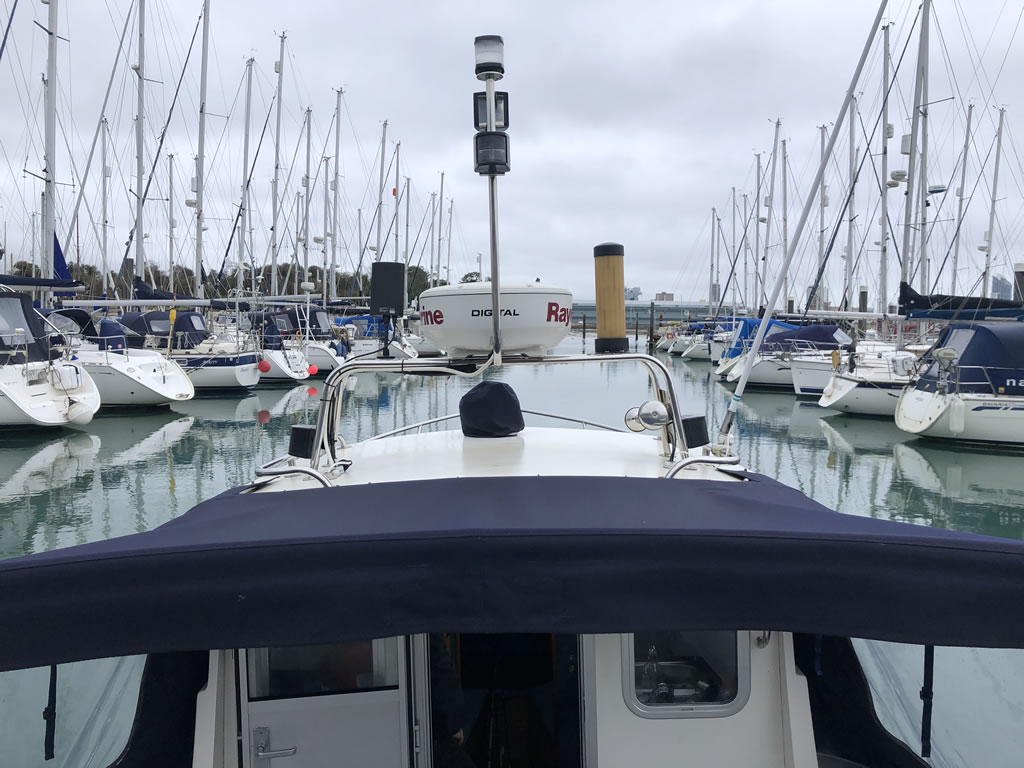 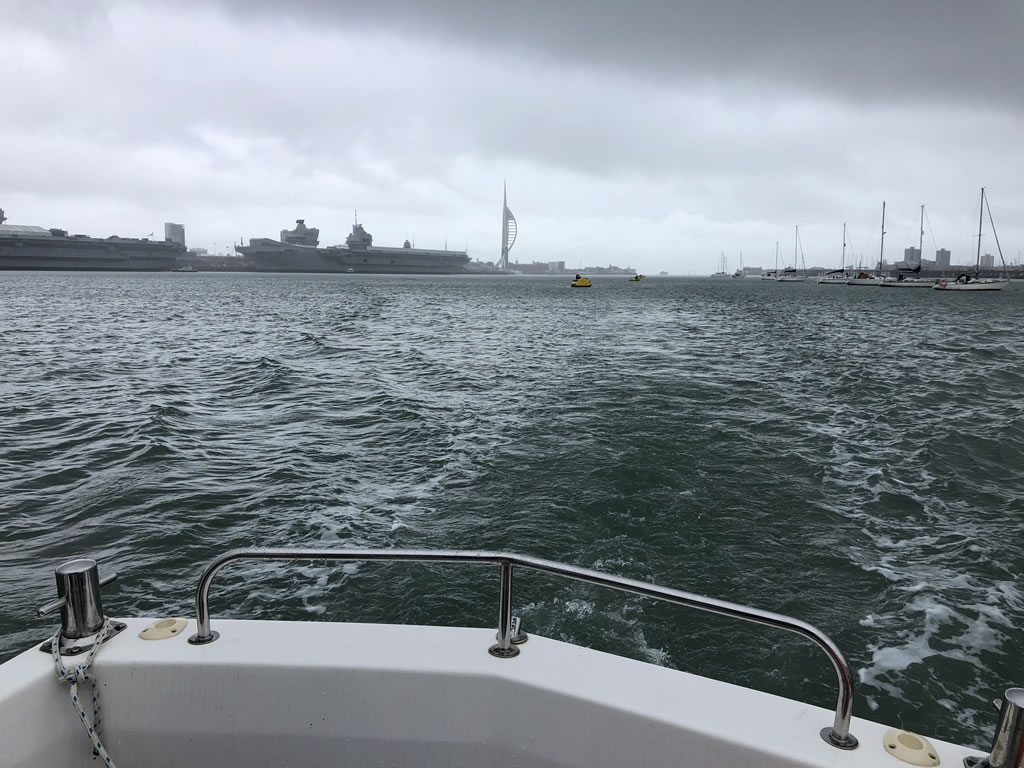 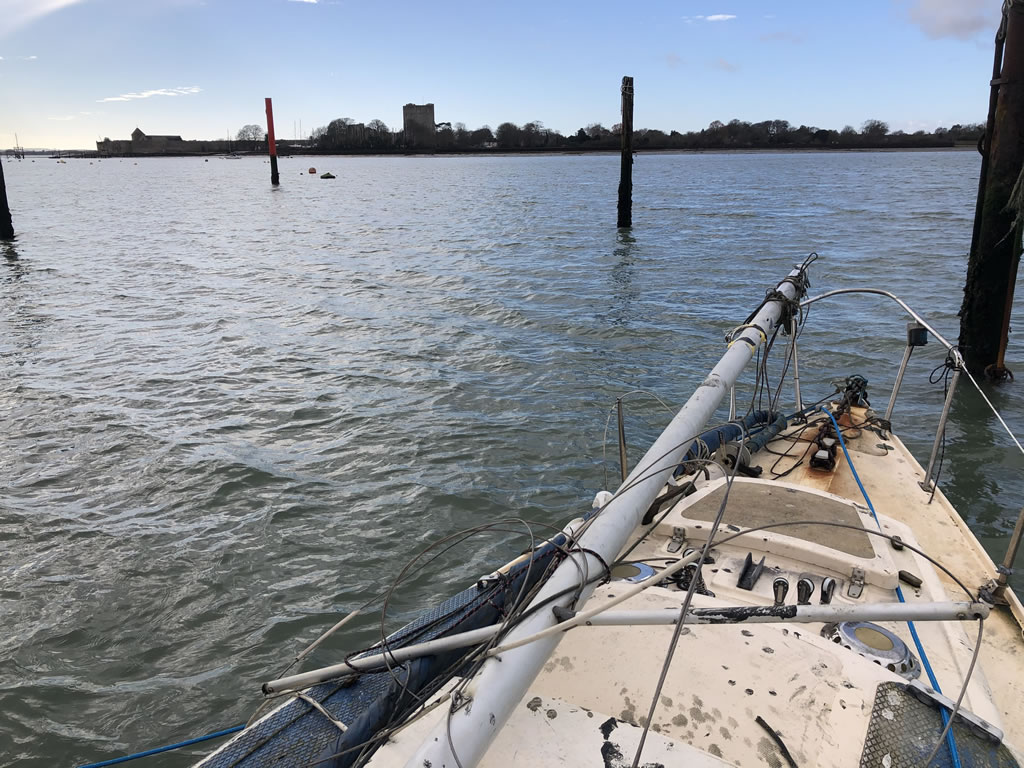 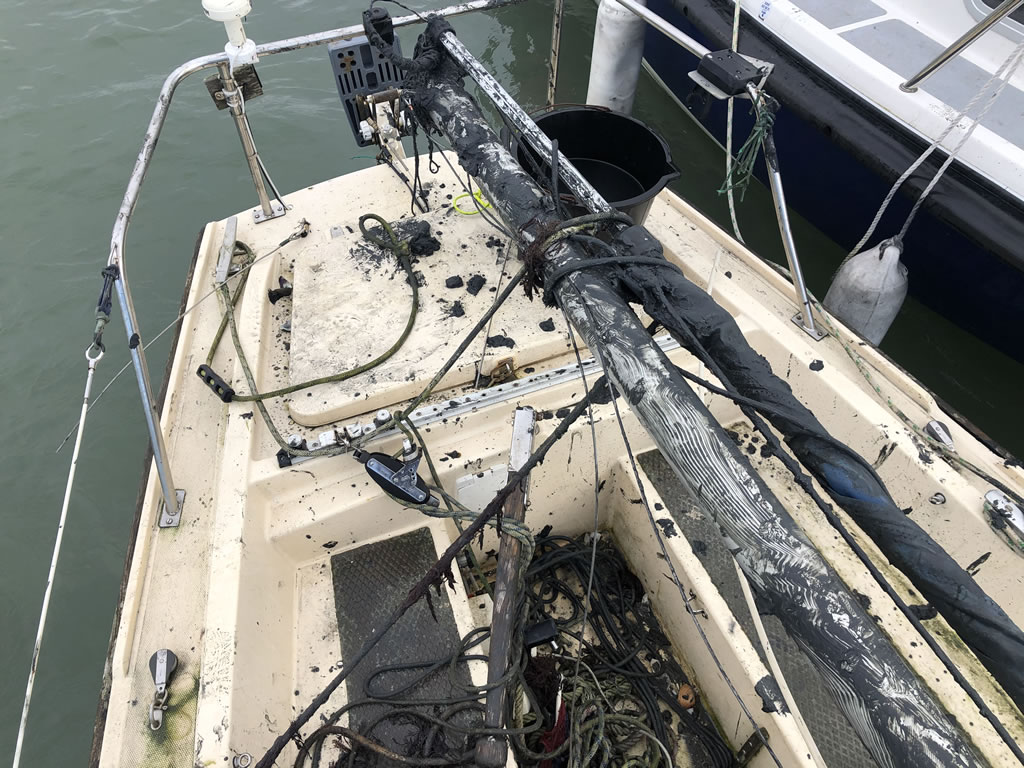 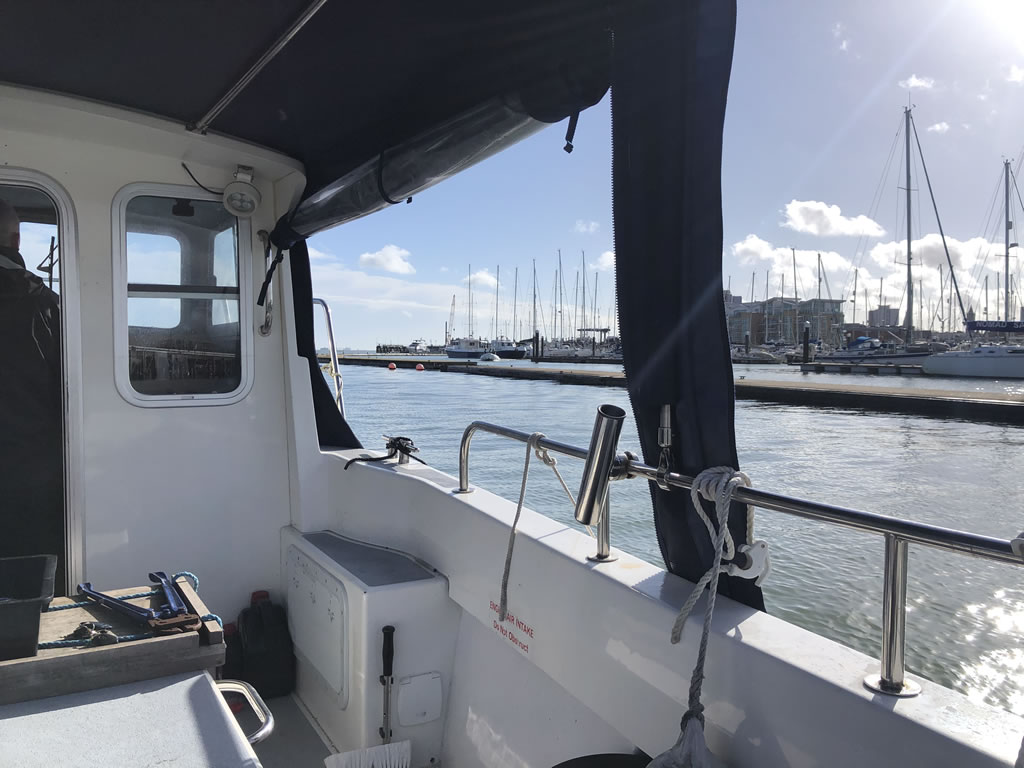 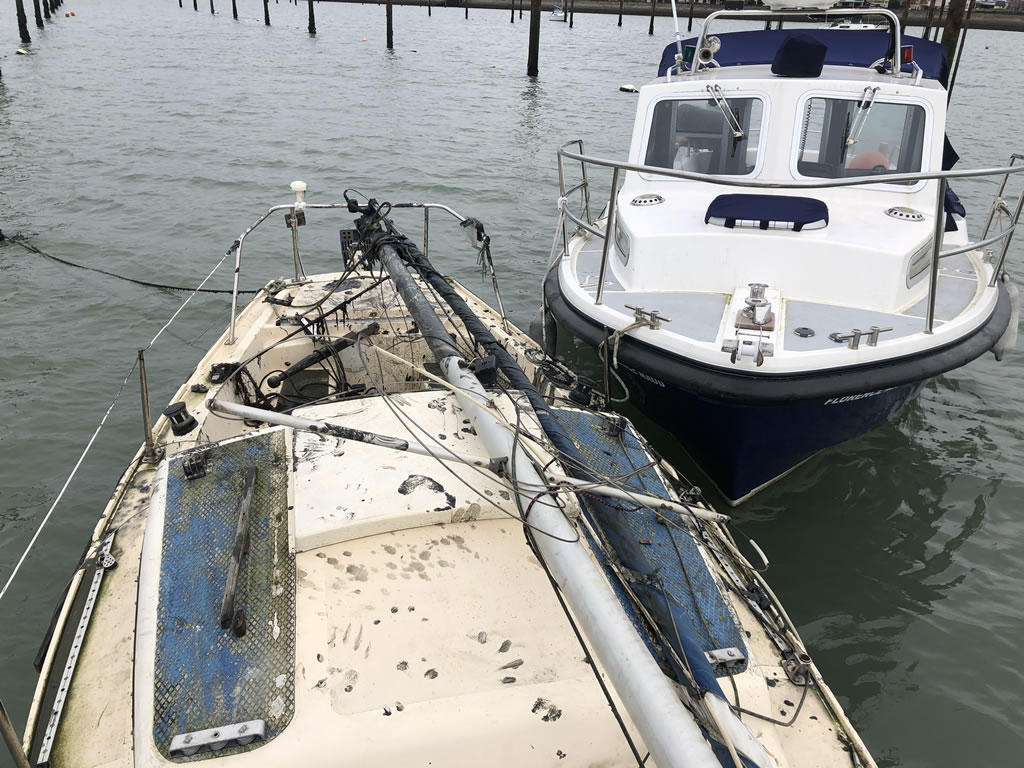 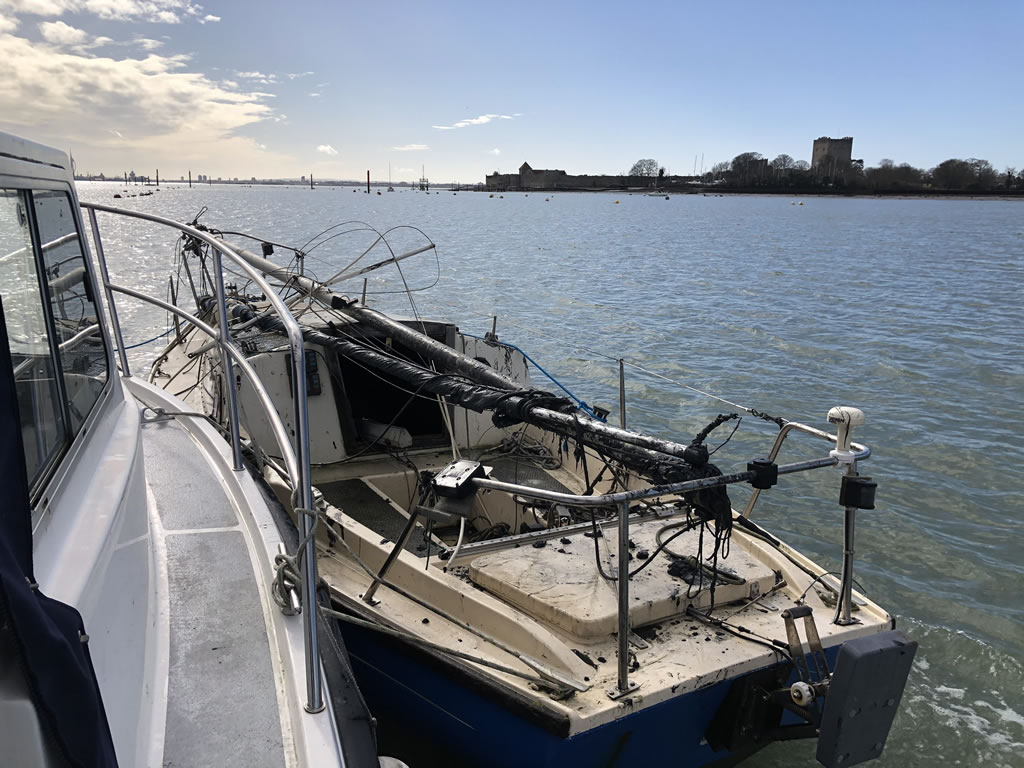