Skip to content
You are here:Home/Articles/The Issue of Boat Disposal
Previous Next

The Issue of Boat Disposal

During the last sixty years, the marine industry has been churning out increasing numbers of recreational and working craft, the majority being fibreglass (glass fibre reinforced polyester). An aerial view of almost all waterways in developed countries reveals a plethora of small boats occupying much of the available water space.

The International Council of Marine Industry Associations (ICOMIA) has estimated that there are more than 6 million recreational craft in Europe alone. Of the hundreds of thousands that lie in marinas or boat yards most rarely move, venturing out less than half a dozen times a year.

Because GRP boats are highly durable, end-of-life (EOL) disposal has not so far been a major issue. Many of the numerous GRP boats produced in the early years still exist. But sooner rather than later even these early composite boats will come to the end of their life cycle.

The present trickle of EOL disposals is likely to become a flood as successive generations of old fibre-glass boats reach the end. Unlike metal and wooden boats, that are made of recyclable or naturally degrading materials, fibreglass craft leave a lasting trace on the environment. 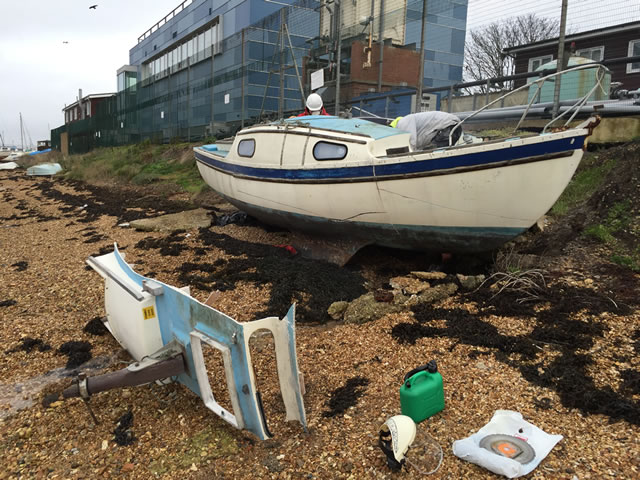 A Fibreglass Yacht being cut up by hand 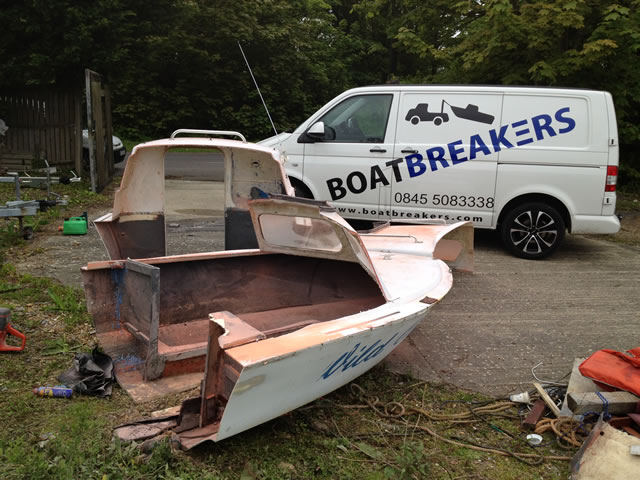 The current methods for disposal are in their infancy and the crude nature of just crushing down old fibreglass and sending it to landfill isn’t sustainable. Due to this approach is considered unsustainable in the long run; already some nations, such as Holland and Germany, have adopted rules stopping the sending of GRP to landfill. Recycling will become the only viable and available option.

There is a process of reducing chopped fragments of GRP still further to sizes from smaller fragments to fine particles. It can produce a product that is usable in construction materials such as cement, in bulk and sheet moulding compounds and even in laminates that could be used for new boats or other products.

In the UK Boatbreakers are the only business actively trying to get the boat recycling sector to develop into a structured system for end of life boats, however at present it’s still in an embryonic form. Currently the activity is relatively small-scale and development of the integrated supply chain that will become necessary will take time. Also, more sophisticated recycling methods must evolve that can retrieve high-performance fibres, including carbon, for re-use and utilise separated resin more productively than simply as a fuel to burn – though even the latter could be a viable option.

A range of initiatives have addressed the issue, given impetus by the growing tally of vessels that are abandoned on beaches, in marinas, in fields and at sea (sunken) by their final owners who, faced with major costs and lack of disposal infrastructure, feel there is little alternative or simply that they can just get away with it. Consistently, all signs that could help identify those owners – Hull ID numbers, registration details and the like – are removed before the boats are abandoned, so harbour and local authorities are having to pick up the bill.

In the past the European Union sponsored a project that addressed the end of life issue as part of an aim to reduce the environmental impact of the marine industry. The BOATCYCLE programme, implemented in Italy and Spain between 2010 and 2012 and so called because it attempted a ‘cradle-to-grave’ lifecycle analysis of vessels’ economic and environmental impacts, investigated disposal options for four types of vessel, a small yacht, a sizeable sailboat, a rigid inflatable boat (RIB) and a fully inflatable craft.

An aim was to establish the total costs of disposal, including transport, using well tried methods that are familiar to scrapyards worldwide. For logistical reasons, the sailboat was scrapped at a boatyard located in a Catalan (Spanish) port. The other craft were easier to transport by truck to a central location.

In the case of the most intricate disposal/recycling challenge, the sailboat, the first step was to decontaminate the craft by removing waste oils and fuels, bilge water, batteries and other environmental contaminants. Next, all the metal items including spars, fittings, stanchions etc. – were removed. Once stripped down to the bare hull the craft was reduced with hammers, saws and a hydraulic grapple, to large pieces. At this stage wiring, foams, engines etc became separated and were removed.

Then different wastes were placed into containers for weighing and separate treatment. Fibreglass content, the highest proportion of the waste by weight, was sent as small fragments to landfill – the prevailing practice today. However, this practice has potential health and safety implications, uses scarce landfill capacity and incurs landfill taxes, which are steadily rising. Hence alternatives are urgently needed.

BOATCYCLE investigated and piloted a number of recycling pathways for the variety of craft in question. A key approach was to mix recovered fibreglass with certain thermoplastic matrices to produce new composites that can be used industrially. A similar pathway was piloted for neoprene, the basic material constituent of inflatable craft and RIBs.

The project succeeded in showing that fibreglass can be recovered as part of the EOL boat disposal process, that a useful proportion of the fibres’ original as-new properties are available in the recovered form, and that the fibres can have a second service life. Moreover, the resulting thermoplastic composites are, unlike thermosets, themselves recyclable since they can repeatedly be re-moulded under heat.

Who will pay for end of life boat Disposal?

BOATCYCLE’s ambitious mission to investigate impacts over the entire boat lifecycle was illuminating, particularly in showing that EOL disposal overall needs to be better managed and that there are better options available than those pertaining at present. The big questions that arise, however, are what costs are involved and who will pay them?

Researchers calculated that the average cost of conventionally dismantling a 23ft long boat, including logistics, is £800, rising to some £1500 for a 32m craft and £15,000 for a 50ft vessel. (The rise is related more to boat volume than to length, and to the greater complexity of larger vessels).

Some say that the costs should fall on the boat owner, but many of the owners who are in place at the ends of boats’ lives are unwilling or unable to afford such substantial sums, at least within a short time span. Unlike owners of metal boats, which have significant scrap value in their recyclable metals, those of reinforced plastic craft cannot rely on embodied scrap value to reduce disposal costs. Collecting the costs from owners, even those that can be traced, would be difficult.

Another objection to this approach is that it would require every boat to be registered so that ownership can be traced throughout its lifetime. This imposes the need for an additional bureaucracy which, itself, would have to be staffed, managed and funded. However, registration also allows the possibility of imposing on owners an annual boat tax, akin to car tax, the resulting fund being earmarked for EOL disposal. This levy would be less onerous for owners over the duration of ownership than an EOL lump sum payment. Alternatively, the cost could be shared between owners and the boatbuilding trade, the two principal stakeholders in boating, by using a combination of purchase levy with an annual ‘boat tax‘.

Although End of life concerns have not yet instilled in most boatbuilders and their suppliers a high sense of urgency, they surely will. Law makers and landfill costs will see to that.

There are about 6 million recreational craft in Europe alone, and with boat lifespans of 30-45 years, some 140,000 of these boats per year can be expected to become due for scrapping. Most will be composite and the majority of those will be GRP.

Expand this picture to global scale and it seems clear that, in years to come, rational, affordable and environmentally acceptable means of processing the multitude of vessels out there after their service lives end is destined to become not only a big challenge but a major business opportunity too.